Late last night she saw a bus go by. A hot gassy roaring bulk loomed out of the dark and showed its face, lit up like a carnival. No route or destination across the front. Just, “LAST BUS TONIGHT.” It was the kind of thing an uncle might say, all rough cheer and cologne camaraderie.

It’s said the poor always give easier than the rich. This bus proved it, this lost and trailing remnant of the day disappeared. The hour was so late, and the day’s battles so multiple, and the souls still upright and prevailing so few, that destinations and things like destinations were obsolete. Mattered none.

It didn’t occur to her to take it. Or to not take it. She saw the bus. She knows what buses are for. It was just too much.

It was too kind, too much kindness after all of it. She preferred to walk. 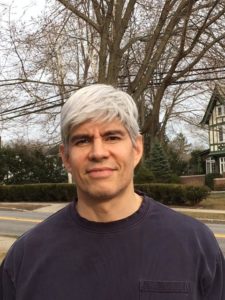 George Choundas is a non-fiction editor at The Paris Review,  Belgian satirical magazine Ausnahmsweise, and the Wellswood edition of The Greater Tampa Bay Intelligencer. That is to say, he is not a fiction editor at any of these. He has work in over fifty publications, including The Best Small Fictions 2015. His short story collection, The Making Sense of Things, won the Ronald Sukenick Innovative Fiction Prize and was shortlisted for the Katherine Anne Porter Prize in Short Fiction, the Robert C. Jones Prize for Short Prose, and the St. Lawrence Book Award for Fiction. He is a winner of the New Millennium Award for Fiction, a former FBI agent, and half Greek/half Cuban.