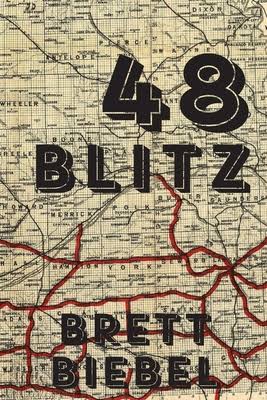 A quiet sadness reverberates through the pages of Brett Biebel’s 48 Blitz. Set in Nebraska, the debut collection of flash fiction focuses on characters that seem to be haunted by something—from a corporeal person to a crucial mistake in their past. Those fortunate to be free of such a weighted presence are, instead, stifled by their present circumstances. The only truly happy character, if it can be called as such, is capitalism, which feeds on misery and death.

It’s a harsh world in 48 Blitz, but it’s real. And the lives that populate it are at once ordinary and unusual. A politician banks his entire campaign on visiting bowling alleys; a man decides to never set a single foot out of his house for an entire year; a woman obsessively takes picture of roadkill; a marketing prodigy comes up with a deadly idea; and an author goes to schools to promote his book. The last one is the somewhat meta piece called “Interloping,” set around a book called “48 Blitz” that is about football. (The sport is crucial in some 48 Blitz stories—the book itself is divided into four quarters of 12 pieces, each in honor of the game’s structure—but, no, this version of Biebel’s collection isn’t just about quarterbacks and linebackers.)

The one story that stands out, both dreamlike and rooted in reality, and filled with equal parts of hope and sadness, is “Luisa.” The last piece in the collection,  it begins with the scandalous confession that the narrator was in love with his cousin as a child. But then it goes on to be so much more: The violence of farm life and the sweetness of a nightly family ritual of discussing each other’s dreams. More than that, it’s about grief and how we each come up with own ways of dealing with it.

This last story is beautifully written (simple and full of details) and beautifully told (in flashback, full of retrospective regrets), leaving a far greater impact than any other tale in the book.

If I have one complaint about this collection, it is that 48 small stories set in the same place, about similar kinds of people, can get repetitive: all those who partake in alcohol pick up High Life; all those who go out to eat, do so at Mulberry’s. (The latter also ends up serving the last meal of quite a few characters.)At one level, it makes sense to have such homogeneity, but on another level is a real danger of feeling like you’re reading the same story over and over again.

48 Blitz is like a snow globe—a concentrated effort at containing a perfect microcosm of a scene, a place, and a feeling. Sometimes the swirling snow will seem to follow a familiar pattern, but then it’ll fall in such a way, set such a scene, that you’ll be struck by the simple elegance of it all. 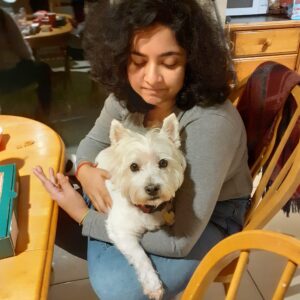 Srijani Ganguly is a former journalist with a master’s degree in creative writing from the University of Limerick. Her short stories have appeared in The Honest Ulsterman, Silver Apples Magazine, Fairlight Books, and other magazines. She currently resides in Dublin, Ireland, and can be found on Twitter @gigiganguly.