Yes, we expected the fish to die. That’s what fish do. And that’s what they did. We’d come downstairs each morning and there’d be another tiny body on the kitchen floor. They look smaller and duller when they’re dead, like cloudy pieces of old plastic. We didn’t always find the bodies. Sandy and I figured maybe Mr. Kitty scarfed up the little corpses.

It’s hard to read fish. They look either perpetually surprised or totally chill, so the ones still swimming didn’t offer up any clues. My parents had claimed they’d be a great “learning” present for the kids. Right. (Merry Christmas, kids, here’s a crash course on Death and Dying, love, Gaga and Bobo.) Neon tetras, angelfish, zebrafish, harlequin rasboras — they’re pretty, but the kids were quickly bored. My parents were just miffed that we visited Sandy’s parents more often. They knew I’d be the one saddled with taking care of the tank. And blamed when the fish croaked.

So yes, the fish died. Except for Sunny, the goldfish, who had his own bowl. We’d had him since Holly was in preschool. He was a birthday party favor and came with two other fish in a sandwich baggie. (Seriously, who does this?) We bought a gallon fish bowl, and the fish seemed fine until we found Goldie and Frank floating belly up one day, Sunny swimming merrily beneath them. Sunny grew and grew and sort of filled the bowl. He developed a little crimp in his back — okay, he looked like a boomerang — but he seemed happy enough and we let him be. We put the tropical fish tank near his, thinking he’d appreciate the company. But soon he started flipping his tail at me when I fed him.

With the tropical fish kamikazeing, I rushed downstairs each morning to check for bodies. One bleary-eyed Saturday, I noticed a zebra-striped fin trailing from Sunny’s mouth. The tank and his bowl were about a foot apart, so I figured the zebra had jumped out of the tank and landed in Sunny’s bowl. I thought goldfish were vegetarian, but I work at City Hall, what do I know? The next day, another fish just disappeared. No body. Another vanished the day after that. Then, I caught Sunny in flagrante, chasing a dwarf angelfish. He ate it with relish. I picked up his bowl with shaking hands and carried him into the family room. I swear, if fish can smirk, that fish smirked at me.  Then he opened his mouth wide and flipped me off.

When Mr. Kitty lost a paw, I moved Sunny’s bowl to the basement near the furnace. We don’t let the kids down there. Mr. Kitty mostly stays in the hall closet now. Sunny swims round and round, giving me the side-eye when I feed him, smacking his lips. 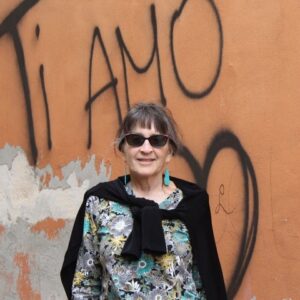 Mary Rohrer-Dann writes and paints in central PA. Her books include Taking the Long Way Home (Kelsay Books, 2021) and La Scaffetta: Poems from the Foundling Drawer (Tempest Productions, Inc.)  Her work also appears or is forthcoming in Third Wednesday, Clackamas Literary Review, Flash Fiction Magazine, Literary Yard, and other venues. She is a long-standing volunteer with Big Brothers/Big Sisters.