After the fire at Abernathy’s we went home, ate dinner, and wrote letters to loved ones who would never read them. Tweety caught a month ago and we buried her in the front yard and lifted a crucifix in her honor strewn with dead roses and broken yellow feathers. The next day Papa packed the walls with asbestos and bought everyone industrial coveralls, rendering in our family a callipygian aesthetic. Fifi and Willy draped flowers over the door lintels and lunette, and wore ivy garlands in memory of the fallen.

At his gravesite we left toys and dried sprays, letters to take with him; on the way home, driving through the interstate, an old man caught inside a car with his wife and grandkids and their faces ran down their molten skulls like pork oozing off the bone. Hazmats came and whisked them away. When the neighboring homes burnt they left human nuclear shadows etched across the indoor walls. My lover, Cisco, drowned the day he witnessed an entire tenement jump from burning windows.

Alone and unloved, Fifi was fanning the fur when we heard her cries upstairs. We watched in horror as she blackened and bubbled on the floor like a roasted leaf.

That’s when Papa closed off the attic.

The world was changing. There were fires everywhere, people dying—bodybags on roads and full graveyards for later disposal. We endured the best we could.

Papa’s demise came while he was changing out the backyard grass for durable artificials, diving clumsily into the verdigris pool only to resurface as a Francis Bacon transmute. Mama was eight months gone and sleeping when her hair blazed in hysteric flames. Frantic, she rushed outside to furl in the grass, lighting the better half of the patio.

The infant was shrill and reckless and would crawl out of sight to find Mama. Overcome with sudden grief and sadness, I left the child alone to fend for days. A week later, a small fire burned in a corner of Mama and Papa’s room and I threw the fiberglass spread to put it out. That same day I lugged the other three from the attic and sat them around the dinner table to discuss family matters: Fifi fretted over boys she liked. Mama ensured world peace. Papa admired how well I had kept the house. The power had long gone and a radio ran all the time. Reports announced the mid-year record: 20,000,000 and climbing. A candle burned as centerpiece—garlands and totems, flimsy family photos, fruit rinds and unsprung toys decorated the base. In the gray light I watched Bubba drool this thick black goo out a charcoal yawn. Sadness ebbed watching the slow, dying descent of the wan flame.

After the fire nothing would matter; we’d weep for those gone, share our stories, learn to take heart again, and thank God for all our happy days. 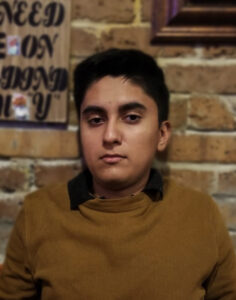 Born in Mexico City and a Florida resident for over twenty years, Juan Jose Gomez began writing short fiction at thirteen. He studies at a community college in Manatee County and hopes to have more of his prose and poetry appear in print in the following years to come. This is his first-ever publication.