Josh had brash American ears, a French nose, and British sensibilities. His hands were unaffiliated but his heart belonged to Mommy. It was understandable. When Josh was only five his father’s Italian feet had walked out on the family, taking with him a Spanish mistress and most of their savings.

Josh grew up a United Nations, a Tower of Babel, his body a compilation of unaffiliated genes, unable to communicate.

His Costa Rican adenoids opposed war, while his German feet marched to the beat of a different drummer.

His Thai teeth tested spices so fiery, his Midwestern tonsil silently screamed and his Swiss intestines got heartburn. His Middle Eastern bowels were filled with perpetual unrest, rumbling violently and often threatening to explode at inappropriate, or propriate, times. He was a mess, but he would have survived had it not been for the Latin faction.

His Sicilian left lung and his Columbian spleen plotted to plunder a pharmacy—and they would have gotten away with it, too, had they not paused to scrabble over division of the spoils.

While they squabbled, his Calvinist fingers called the police and his Presbyterian heart gave out.

When the Austrian police arrived, the drugs had disappeared.

Josh was hospitalized, treated by a Belgium physician. When he recovered, he was detained by a Japanese warden.

The expedition wars began, each country claiming a piece of its own. It wasn’t pretty. It made drawing and quartering look like a barbecue—a barbecue where each party brought a carving knife.

But before divisions could be agreed upon, his Irish left knee declared independence from his English thigh. His Quebecquan femur separated from his Canadian calf. As the Middle East rumbled, threatening war, his Tibetan ribs broke away from their Chinese sternum.

His world exploded. The drugs, hidden in his Bimini nasal canals, hailed down upon the fragments of his fractured corpse like small, round, hard, narcotic rose petals. 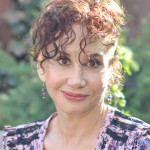 E.E. King is a performer, writer, biologist and painter. Ray Bradbury calls her stories “marvelously inventive, wildly funny and deeply thought provoking. I cannot recommend them highly enough.” She has worked with children in Bosnia, crocodiles in Mexico, frogs in Puerto Rico, egrets in Bali, mushrooms in Montana, archaeologists in Spain and butterflies in South Central Los Angeles. Check out paintings, writing and musings here.