I will not be born for another nine years.

It is my father’s first foreign posting; my mother is his bride. She leaves a sprawling home in Calcutta and fifteen playmates to take his hand, crossing black seas to go where he will go. In a house as vast as her natal home there are the two of them, a maid, a gardener’s family… only silence speaks her language through cavernous days.

He has not learnt to woo her; they both married when told.

But one day he brings home a sari from the Parsi merchant. Look, he says, unfurling a shimmer of cloth on their bed. The rose color reminded me of you.

He is color blind.

She sees a snot-green of silk; it reminds her of mold on damp monsoon drains.

She picks up the sari and drapes the pallu coyly over a shoulder. She looks at the ground and says, This is the most beautiful thing I have ever owned. 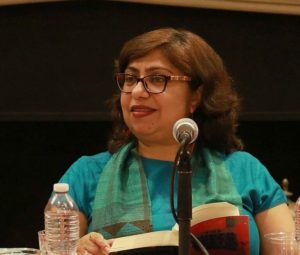 Dipika Mukherjee is a writer and sociolinguist. Her second novel, Shambala Junction, won the UK Virginia Prize for Fiction (Aurora Metro, 2016). Her debut novel was longlisted for the Man Asian Literary Prize and republished as Ode to Broken Things (Repeater, 2016). Her short story collection is Rules of Desire; The (Fixi, 2015) and she has two poetry collections: The Third Glass of Wine (Writer’s Workshop, 2015), and The Palimpsest of Exile (Rubicon Press, 2009).  In 2018, Mukherjee received an Illinois Arts Council Agency Grant; she was born in New Delhi, India, but now lives in Chicago.