—not a goddamn light for miles on this road in the middle of nowhere, and we pay taxes enough to light the whole of New Jersey for the privilege of living in a place even the internet can’t reach because of the goddamn mountains that Julia wants so much to paint in acrylics, not even oils, no—acrylics so crass she might as well paint with shit, for all the subtlety she captures: the soul of the forest, she moans, like the forest is doing the nasty with her; listen to the earth breathe, breathe, she says, which she can’t hear in Manhattan or even up river in one of those little towns with lights where the Hudson River artists painted the mountains and the river and nature up the wazoo in paintings so big they have their own room in the Metropolitan Museum in Manhattan where the lights never go out—

—and little Julia, sweet little Julia, whiny little Julia—but what would you expect, what kind of woman names her daughter after herself, like one Julia smeared with acrylics, even though they’re water soluble, isn’t enough; poor kid, pulled out of her school away from the friends she never had, but at least had the potential to have, if she wouldn’t take so much after her mother–not her fault, but sure as hell not mine…well, maybe a little, maybe the spineless part, that can be taken from a well-lighted place to live in a dark goddamn forest, the part that can’t say no,  we better send her to an all-girls school—

—afraid of a sleepover with the only other kid within driving distance of our Fortress of Solitude, so Super Dad can do the midnight run and scoop her up in her pajamas while Mommy van Gogh lies in bed after prying the acrylic from under her nails, and whines about her vaginitis and our lack of intimacy  (maybe it’s simply splinters up there from fucking the forest) while I finish the novel that became a novella that became a short story that’s becoming flash fiction, 500 words tops, for the new generation of readers: need books in suppository form so they can shove them up their asses and read by osmosis—who am I kidding; that’s where my stuff belongs anyway after twenty years of having potential and living on Julie’s father’s money—

—skid on a goddamn squirrel or a skunk; know when it’s a skunk cause of the stink—worse than a kid who wets her bed—old unwashed brushes caked with acrylics, acrylic tubes like some awful toothpaste all squeezed and oozing till a hard little crust forms like a scab and stops it up but not forever, like some awful hand with acrylics under the nails has crushed and left it for dead Oh Christ— 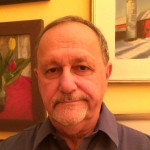 Paul Negri was born, raised, and educated in Brooklyn, NY. He is the former president and publisher of Dover Publications, Inc. His stories have appeared in Bartelby Snopes, Pif Magazine, and other publications. He is the 2015 Gold Medal Winner in the William Faulkner-William Wisdom Writing Competition’s novella category.