By the time I realized that Babylon’s discomfort was serious, he was dead. I found him splayed on the floor of his cage. Death seemed to have enlarged him, and his hair and skin bristled with his parasites. We never know what we have until it gets eaten.

I said to Babylon, That’s what you get for not listening to your mother (When you feel guilty, it is therapeutic to pretend to be angry).

Of course, I had to call William to tell him the bad news. But he was in quarantine again, and felt that he was entering the final phase. So I buried Babylon in the flowerpot on the balcony in which I otherwise keep the sweetpeas. So the sweetpeas had to die. Have you noticed that death breeds faster than life?

That night, I dreamt that Babylon pushed open my bedroom door and was clawing at my stomach, growling Babymama, Babymama. Naturally, I informed him there was no way for him to get back in, but dead dream things so seldom listen to reason. In the morning, I planted the flowerpot with garlic, just to be on the safe side. I would not wish for him to turn into a vampire. I owe him that much.

Then William came back, and was in a foul mood because he was sure next time it would be the end of him. But this mood passed, and one twilight in autumn, William woke up and said that the smell of Babylon was gone. I tried to convince him that I had only given Babylon to the landlords for safekeeping, just until the plague was over; they had a bunker and would throw food scraps in. But William only laughed—he is an atheist; he does not think the plague will end—and demanded that I tell him the truth. I insisted that the truth was even deader than god, but he dug up the flowerpot anyway.

Now Babylon was all bones. I told William to be glad, for in this way, Babylon had fed many. We could plant anything on him, to feed on him: cedars, chrysanthemums, leeks. But William is full of taboos, and we had to go to a cemetery. I warned him, but he insisted.

William carried Babylon in a plastic bag, and I made a fine cross out of old gas canisters for the camping stoves. I picked some petunias from other graves, while William etched an inscription with his flamegun: IN MEMORY OF BABYLON, FROM BABYPAPA AND BABYMAMA. TILL NEXT WE MEET.

Of course, in the morning, they picked us up. They had so many reasons, I could hardly keep track: illicit procreation, abuse, neglect, practicing of parenthood without a licence, dissemination of harmful organic material, unlawful burial.

They had us; of course, they always have you. But it’s more fun for everyone to wait. And in the interval, of course, there was Babylon. Sweet Babylon; I remember his first smile. 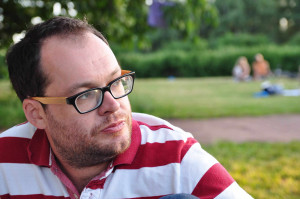 Josh Stenberg is a writer and translator dividing his time between British Columbia, China and Taiwan. Recent work has appeared in Queen’s Quarterly, The Antigonish Review, and Contemporary Verse 2. In civilian life, he writes articles about actors and puppets for a living.