Byron’s dorsal fin drooped as it cut through the surface. I told tourists that it’s normal for his dorsal fin to resemble a bent knife. His dorsal fin looks the same as a wild, free orca’s. Before they googled images of orcas soaring through vast oceans and saw perfect, black triangles slicing through the water, I directed them towards the otters.

After finishing tours, I drank coffee spiked with vodka and watched Amy stretch for her performance with Byron. She scoffed.

“Stop being a creep, Eric.”

“This is how I wish you good luck.”

“Ha, ha.” She grabbed my cup and smelled it. “It seems those lies are eating you up.” She finished it for me.

“Good. I hope you find something better.”

I stared into her brown eyes. She placed the empty cup in my hand and smiled. She rubbed my fingers and walked away. I crushed the cup. Droplets of coffee slid through my fingers and fell on the floor.

On the tempo of Amy’s whistle, Byron performed tricks for a massive crowd. He hit backflips and somersaults. He lay on the plastic shore and Amy rubbed his head. She asked for his flipper. He held it out and she shook it.

Amy glowed with power. She couldn’t stop smiling. She ordered him back into the water. He obeyed. She dived into the concrete tank and climbed on top of his back. The crowd clapped until their palms swelled with red. As she rode him, his eyes turned crimson.

Byron shook her off. He clamped down on her leg and wouldn’t let go. I rushed from backstage and shoved a pole into his mouth and pried his jaws open. Amy swam into my arms and I lifted her out of the bloody water. She shuddered against me, breathing rapidly into my ear. Water droplets fell down her pale cheeks.

Amy lay in a hospital bed with thirty stitches in her leg. The nurse brought her a ham sandwich and chips. They sat on a tray, near the foot of her bed. She stared at gymnasts, twisting and flipping on television. It’s the only station that didn’t report what happened. I stood up and walked towards the bathroom.

“If you go in there and wash your hands again….”

“It’s amazing how they do that.” I put my hands in my pockets. “Do you think we’ll win gold medals this year?”

She saw her blood under my fingernails. They became mirrors, reflecting the pressure I put on her wound, as the paramedics brought a stretcher. She didn’t say much, but held onto my hands, like they were lifeboats, stopping her from drowning. 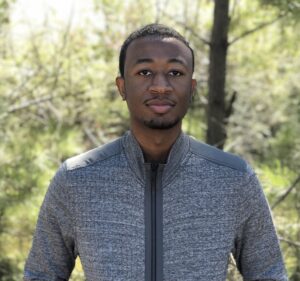 Jerome Newsome was born and raised in Portsmouth, Virginia. He has been published in Aftermath Magazine, 50-Word Stories, and Fiction Southeast (forthcoming).