I’m reading a book and Tina is holding our baby after breastfeeding him when the babysitter says that in twenty to twenty-five years there will be one cataclysm or other she can’t pin down.

“The whole world will be disrupted,” Janet says. She’s knitting a pair of mittens for her cousin back from Desert Storm who can’t get used to Midwestern winters. “Much of earth’s population will die.”

I chuckle. “Is this your idea of light conversation?”

“Why tell us this? We have a one-year-old and Tina’s pregnant.”

“It’s compelling,” Tina says, “you being psychic and all.”

Instead of scary or compelling, I find it outrageous and annoying. Just because she believes herself a 20-something psychic doesn’t mean everyone wants to hear their futures.

We sit around a card table in our Wisconsin family cabin. It’s June, and whip-poor-wills begin calling each other. Tina and I teach high school. Janet is the daughter of my school’s receptionist. We left our Chicago home and bearded collie for a one-week vacation. We invited Janet along, asking her only to look after Justin while Tina and I canoed or walked around the lake.

“It’s something I do. Like find and identify spirits.”

Beyond the cross-hatched pine and glass doors, the clock on the screened-in porch chirps nine times.

“Maybe your children will be the planet’s two heroes,” Janet says.

“I get a feeling.” Her knitting stops and she looks at me. She pities me. My age and graduate school education have poisoned my imagination.

“You know,” she breaks into a smile, “your father is standing over there by the closet.”

I look toward the thin door holding playing cards, poker chips, rubber balls, and a wooden horse on four wheels. I really look.

“The one with green palm trees on it?” He wore it when sailing. She could have seen it hanging in his closet. Is she feeding us this bullshit so she can somehow make money off it?

He wore them when fishing.

Tina says, “How does he look?”

Tina shifts in her chair. “Take the baby. I’m standing up.”

I lift him out of her arms. He stirs, then falls back to sleep, dreaming perhaps of a future filled with floods, fires, and viruses. He trusts me to protect him from cataclysms, both real and imagined.

“You’ll put him down?” Her voice rises, surprised.

“Okay.” She pecks me on the lips. “Goodnight, Janet. Thank you again for being here.”

Her fingers freeze. “Thought you’d like to know.” She stares down at the unfinished mitten, a mere suggestion of its future form. But now I see it slowly taking shape, right before my eyes. 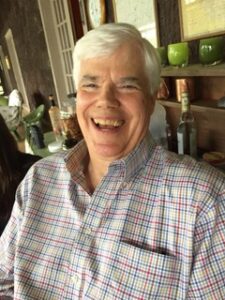 Richard Holinger’s two recent books, North of Crivitz, poems focused on rural Upper
Midwest; and Kangaroo Rabbits and Galvanized Fences, a collection of humorous essays about domestic life, are available on Amazon or richardholinger.net. He has received four Pushcart Prize nominations. His Thread essay was a “Notable” in Best American Essays 2018. His fiction, poetry, and essays have appeared in Witness, The Iowa Review, The Southern Review, and Boulevard, among other journals. A former secondary school and university English instructor, Holinger lives an hour west of Chicago in the Fox River Valley. Degrees include a Ph.D. in creative writing from the University of Illinois at Chicago. Former jobs include security guard, stock boy, busboy, and caretaker.