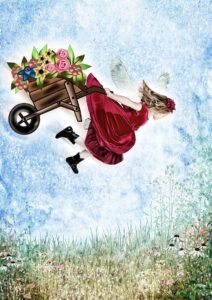 How fast was I going?  I don’t know exactly. I can only answer with mitigating circumstances: how I only get to see my little Suzanne twice a month, how I miss her very much, how I’m late to her party because I just graduated college, of all things, and she couldn’t be there to watch.

How hard I’ve been trying recently.

But the officer already knows how fast I was going, and doesn’t ask me any questions. Doesn’t even look at me. Instead, he just says, “License and registration,” and leans catty-corner to my window, his shaded eyes glancing elsewhere.

Defeated, discouraged, I give him what he asked for.  He bends down to receive it.

And soon as he grasps the documents, his whole demeanor changes.  He chokes up, then laughs a little, then covers up his mouth.  His aviators slide forward, and what is behind them twinkles.

I know now that he has seen my rainbow wig, my big floppy shoes, and my pancake makeup.  I know too that I have the upper hand.

Quickly, I make the magic happen.  I make it rain playing cards; I show him twelve galaxies in the catseye of a marble; I pull a rabbit out of my pants.  Like all good children at heart, he giggles.  He claps.  Behind him the traffic whizzes past, Toyota herds and Nissan hordes, men and women and a truck full of chickens bound for processing, all of them breaking the speed limit, all of them oblivious to the miracles the two of us are witnessing.

“More, more!” the officer demands giddily, dancing on his heels.

“Do you have a set of handcuffs?” I ask.  I honk my rubber nose as punctuation.

He smiles as he hands them over.

I smile back and perform another trick. 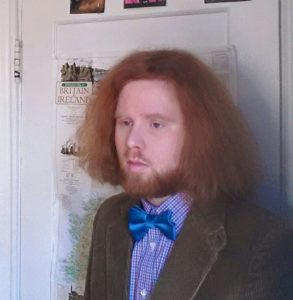 Ethan Cade Varnado is a native of the New Orleans area. His work has previously appeared in Product. He attended the MFA program at Virginia Commonwealth University, where he worked at Blackbird and oversaw the national Cabell First Novelist Award. He is also 2018 recipient of a fellowship from the Eastern Frontier Writers Residency Program.