You’ve published novels and short story collections, but No Windmills in Basra was your first foray into flash fiction. What prompted you to switch to flash fiction with this book?

I chose this genre because there are ideas that can’t sustain elaboration or filling in gaps with things that don’t mean much to the reader. Getting an idea across with the least number of words is a difficult task, but just the challenge of doing it isn’t enough: the writer has to have an exceptional ability to create surprise. But I’ve loved this genre of concentrated narrative for a long time, and I read a lot about it before I tried writing the first text.

What makes a piece of flash fiction effective?

A powerful word in the right place may play a major role. But what’s most distinctive about writing of this kind is its odd subject matter and its attempt to provoke questions and generate dazzlement in the reader’s mind. Of course, that’s in addition to building the scene aesthetically, using poetic language that avoids directness, and telegraphing intent.

Are there authors of flash fiction (in Arabic or other languages) whose works you particularly admire?

This mode of writing is new in Arabic literature, and I believe it’s still in its stage of growth, where readers accustomed to longer texts like the novel and short story are still trying to wrap their heads around it. So it’s difficult to come up with an example of an Arabic author whose writing drew me to this form. Early on, I was influenced by the six-word story that some have attributed to Hemingway: For sale: baby shoes, never worn. Then I started reading short texts by Eduardo Galeano, Juan José Arreola, Julio Cortázar, Anton Chekhov, Augusto Monterroso, O. Henry, Kafka, and others.

Many of your pieces in No Windmills in Basra revolve around wordplay or puns. Do you find flash fiction particularly conducive to wordplay?

This genre of literature doesn’t necessarily lead to wordplay: every writer has their own style, and in truth, I’m crazy about puns, weirdness, and creating a little surprise at the end of every story.

In the book, you group your stories by theme, starting with “War.” Did you find it difficult to write about the wars and violence in Iraq over the last four decades?

When the war with Iran broke out, I was four. Scenes of bloodshed, of Iranian artillery bombardments against the city of Basra, and of casualties—civilian and military—were everywhere. A child’s memory preserves all that. When I felt the time had come to write about war, I didn’t want my own writing about it to be conventional, so I chose irony, humor, black comedy, and sometimes jokes, to present a different story, and not just the account of an incident. I tried to show war in a way different from what we know of it from familiar stories. Of course, with the addition of a little weirdness and fantasy.

Diaa Jubaili (b. 1977, Basra, Iraq) is the author of eight novels and three short story collections, including What Will We Do Without Calvino?, winner of the Tayeb Salih International Award for Creative Writing, and No Windmills in Basra, winner of the Almultaqa Prize for the Arabic Short Story. He was a contributor to the short story collection Iraq +100 and has written for the Guardian. 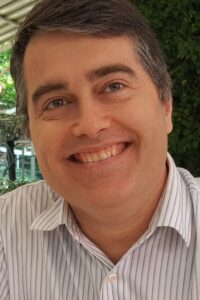 Chip Rossetti has a doctorate in modern Arabic literature from the University of Pennsylvania. His published translations include Beirut, Beirut, by Sonallah Ibrahim; the graphic novel Metro: A Story of Cairo, by Magdy El Shafee; and Utopia, by Ahmed Khaled Towfik. His translations have also appeared in Asymptote, The White Review, Banipal, and Words Without Borders. He is currently the Editorial Director for the Library of Arabic Literature at New York University Press.