I am learning to drive at age 38. My mother learned in her mid-twenties, when she knew she would have me. Her mother—my grandmother—never learned.

My father taught my mother to drive, and now in some ways she’s a better driver than he is. My husband, who’s teaching me, says he wants me to eventually be a better driver than he is. He’s generous: he says I’m learning quickly. He says it’s probably no harder to learn to drive in your thirties than it is as a teenager. But I’m aware now—would I have been then?—of how much care driving requires. It makes me nervous, being responsible for destructive speed, crushing strength. The world seems so filled with bicycles, joggers, dogs, squirrels, delicately boned things everywhere.

As a teenager, I once got into a car with a drunk kid who promised to drive friends and me to the beach. As he sped along, weaving in and out of the yellow lines, a cop tried to pull him over. The guy tried to get away, speeding faster and faster, whirling over a curb, through a school playing field, the police siren wailing behind, us in the backseat. I was briefly terrified he’d kill us. Then he finally pulled over.

Here is something I remember from when I was little: on walks, my grandmother always held my hand, squeezing me so tightly it hurt. As if she might lose me if she didn’t. Was it power my grandfather wouldn’t yield, or responsibility my grandmother didn’t want?

Once, my husband and I got into a long, bitter standoff because we were unhappy in a new city, and although I thought I knew what to say to move us toward making up, I refused, simply because I didn’t like that it should fall to me. But when I confessed this to one of my best friends, she told me that if I knew I was capable of repairing things, I had to be the one to do it.

But why? I demanded.

Power is responsibility, she said.

On new roads, I ask my husband to tell me what to do. I want to be told where to turn, which lane to use, when to speed up or slow down. He instructs me, and I listen. Learning requires faith in your teacher. It means being open to not knowing. To not knowing yet.

I turn in the ignition, and this metal box of crushing power roars to life. Worry runs a bright line through everything I’ve already navigated, and I drive with care, having learned  already that what is strong enough to propel forward can also destroy. 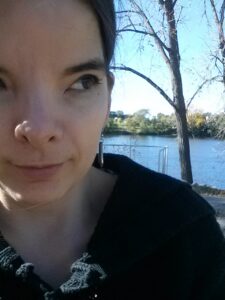 Elizabeth O’Brien is the author of A Secret History of World Wide Outage, a chapbook of poetry from Diode Editions (2018). Her work has also appeared in New England Review, The Rumpus, Diagram, and Tin House.