It’s crowded at the CVS, plink of toothbrushes dropping into baskets, Phil Collins music in the air. There’s a bank of scanner machines at the checkout. They stopped letting humans do that here. I’m waiting in line when out of nowhere, Eve shows up. Eve from the Bible. Eve from the slithery snake.

I have a box of hair dye for my graying roots, hot pink polish for my nails. I’m trying new things since I found my husband’s second phone in the bottom of his gym bag.

A woman ahead of me is yelling at one of the scanners, calling it a stupid, useless turd and can she please speak to the manager.

Eve is fig leaf and no makeup and she pulls me aside and says, “Look, I didn’t have any choices, but you do. For me, there were no other fish, and if we did have Tinder, it would have been Adam, Adam, and more Adam.”

Eve stops to look at the scanners. She doesn’t seem very interested in the woman who’s now pounding a fist on the screen that seems cool and unresponsive, as if she’s not even there. Instead, Eve asks me what happened to the registers, the one with receipts that used to curl out of them, long and sinuous.

I ask her what made her listen to a snake, of all things. A snake is not like a husband that wraps itself around you like you are a tree, squeezes the very breath out of you, changes the color of your hair and nails. I ask her what Adam was doing while she was in the garden, and I suggest that she might have not been talking to a snake if Adam had noticed her once in a while.

The scanner woman is being escorted out by security, the manager pointing the way, telling the woman never to return. Eve looks troubled as if she’s been triggered by the throwing-outness of all of this. She says, “Look I gotta go. Good luck with your husband.”

I move up to the scanner now. I wave the box of hair dye over the sensor, its red eye blinking, blinking. I look at the screen to make sure it sees it. Sees me. Some little sign that I exist. That I’m not just standing in a line of women all through history who felt invisible. A line that stretches all the way from Eve to me. Stacked one behind the other, each one wearing a touch more eyeliner, a shade deeper of lipstick than the one that came before. 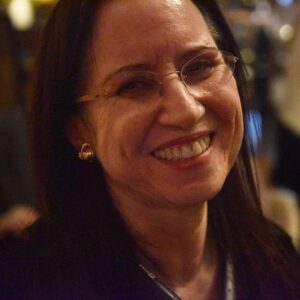 Francine Witte’s poetry and fiction have appeared in Smokelong Quarterly, Wigleaf, Mid-American Review, and Passages North. Her latest books are Dressed All Wrong for This (Blue Light Press,) The Way of the Wind (AdHoc fiction), and The Theory of Flesh (Kelsay Books.) Her chapbook The Cake, The Smoke, The Moon (flash fiction) has recently been published by ELJ. She is flash fiction editor for Flash Boulevard and The South Florida Poetry Journal. She lives in NYC.