We were on the granite coast with the sun going down and the fireworks starting. There was the park with the army-green grass faded in the dusk and you and I were on the swings watching new stars shoot out over the ocean and you said you’d never seen those colors before. I didn’t believe you at first. I said every kid’s seen sparklers against the red sun, even kids from the desert. Though as soon as I said it I realized you weren’t looking at the sky, you were looking at my cheek, which was a purpling sting.

They left me at the edge of the cliff above the beach, while below, they lit dazzlers and fountains and roman candles, shot yellow globes up into the gray. It was beautiful but seemed like a waste, all that money and whatever just for a few seconds of skyglow. Then you were back with light in your hand, like you’d caught one and saved it. You had a towel and dabbed at my forehead, kept saying you’d never seen anything like it. That’s when I thought this might be something.

I thought I had it wrong when you went back inside without saying anything. You had that look, both at his vincible wreck and my bleeding lips, one of those last looks like you were storing the image of it—our sweaty hair and the bruised ground—to remind yourself never to go through this park again. The others thought it was all so funny, the way he and I went at each other, our lousy ocean legs and arms swimming slow. But my chest felt like you’d gotten a shot in before you left, knocked the wind out of my lungs.

There was the guy who thought you were his, grabbed at you with words and hands that’d worked with other women. I stepped in between and he got mad and there we were in the park near the swingset and the sandlot with thick red gloves swinging drunken punches. They circled us; you sat on the low end of the teeter-totter. I clipped the side of his head and he followed hard with a right. I fell backward, recovered, came running at him, and didn’t stop when his hair hit dirt.

We were the only ones awake in the early morning house. I made coffee, asked who you were with. You said no one. There was that smile. We ate eggs on the porch as the fog burned off and we wondered if you could see the fireworks from space, whether the moon would feel lonely in its orbit, would strain to reflect their firelight the way it reflects the sun. Or whether the stars could be jealous we replace them so easily—just gunpowder and flames. 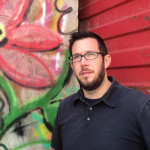 Matthew Fogarty, originally from the suburbs of Detroit, has an MFA from the University of South Carolina, where he was editor of Yemassee. He is the author of MAYBE MERMAIDS AND ROBOTS ARE LONELY, forthcoming from Stillhouse Press (2016). His fiction has appeared in such journals as Passages North, Fourteen Hills, PANK, Smokelong Quarterly, and Midwestern Gothic. He can be found here.