Her father builds it for her in the backyard: a little revolving stage painted to resemble the pocked bedrock on the Sea of Tranquility. Hills no bigger than chicken eggs rise out of the dusty, ashen wasteland, reminding her of anthills and bed knobs, while miniature craters—formed when her father pounded his fist into the cold modeling clay he used to sculpt the lunar terrain—sink in the shadows of the elm tree overhead. When she first walks on the moon, a breeze is blowing and leaves are rustling all around her. Her father brushes them off the stage, then hands her a small American flag on a stick. It flaps quietly as she walks the perimeter, gradually picking up speed. Once the stage starts revolving, it’s as if she’s walking in a straight line, taking an afternoon stroll across the surface of the moon. Behind the stage, her father has installed a big screen, onto which he projects footage from NASA’s most recent lunar mission. In silence, these images play across her face, making it appear like she’s walking not on but through the moon, then disappearing into another dimension entirely. Soon the moon in the backyard becomes a portal, and she approaches it gladly, knowingly, well aware that passing through it means leaving her father behind, perhaps forever. At the last second, she stops walking and turns her head to glance over at her father, who is standing framed by the windows of their living room, waving a long, last goodbye. 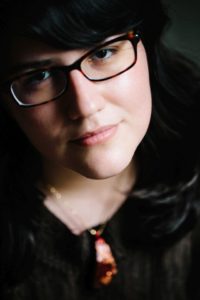 fre is the author of the story collection Night Beast. Her work has appeared or is forthcoming in Kenyon Review, The Masters Review, Prairie Schooner, Lightspeed, Hayden’s Ferry Review, Nashville Review, The Offing, The Journal, and elsewhere.