It was June and we were growing up Vivaldi.

The parentals fled in a cloud of station wagons. Call me when you’re good enough for Juilliard.

A haze of gnats came down and we were stranded in Vermont, babes for your cabins in the woods.

You’ll have one five-minute shower and two meals a day. No cell reception here.  Payphone once a week. Practice 9-12 and 1-6 daily. Lockdown at 9. Lessons as scheduled, ensemble on alternate days. Rest on Saturday. Concerts on Sunday, attendance mandatory.

I watched a single bulb swinging from my ceiling on a cord. A manic smiley-face of endpin-holes adorned the wall. There were fragments in the corners, shards of souls that had broken on your watch, smears of blood and chips of scarlet rosin.

You gave us a week to settle, then recruited us for your troupe. This year, you said, Dorm Paganini would win the Golden Bow. Bug-eyed with excitement, you explained. We’d face a different dorm each Sunday in the concert. We’d beat each one in turn, gladiator-style. In the end, we’d win the trophy.

We found out later you were after old Maritski. Your victory would mean a partnership in the school, a move into the Founder’s Cabin. You’d finally have one over on his wife.

Every day, you had us up at 7 with your air horn. You stuffed us with sweating gobs of blueberry yogurt, fragrant smears of hummus. You rapped angrily on silent doors, calling forth frantic streams of Bach.  You reported lethargy to our teachers, cabin fever to the nurse. Those on your blacklist missed illicit DVD nights and extra shower time.

Come Saturday, you stepped it up a notch. You busted the pipes in Dorm Dvorak. You smeared honey on the floor of Dorm Debussy. Our competition was soaked and eaten by mosquitoes.

You riddled our Sundays with drills and trash talk about our foes. You armed us with Pirastro Goldflex so each bow stroke would be gilded, blessed, victorious.

Thank heaven that you did. In the arena, we faced titans, monsters, giants. There were award-winners from Russia, virtuosi from Finland and Quebec, prodigies from SoCal. We did battle with concerti and sinfonie concertante. We shifted, trilled, and slurred our way to victory. We covered you with glory and your star began to rise.

Now, seven Sundays later, there’s just one match to go. The problem is, Maestra, that none of us can fight.

Elena’s going Psycho with her endpin. Rai is talking to herself. The rest of us hear Mozart in our sleep and pick our blisters till they burst. We languish on your blacklist. There’s been no 300, no Jaws, no Braveheart for weeks.

So this is it, Maestra. Say goodbye to your champions.

Tonight, we howl by moonlight from the roof of Maritski’s cabin. 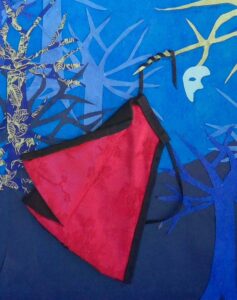 T. L. Ransome is a writer from both coasts and the middle of the United States. Ransome’s flash has appeared or is forthcoming in Reflex Fiction, Ellipsis Zine, The Phare, Flash Fiction Magazine, and FlashBack Fiction. Ransome has been longlisted for the Cambridge Prize and the WriteWords Competition and shortlisted for the Bridport Prize.