Laurie, I walked twenty blocks to see you after school. That Lake Ontario slush soaked through my canvas sneakers but I didn’t feel it any longer when you came to the door and kissed me, wrapping your arms around me, my first real kiss, and one that you made sure everyone in the sixth grade would be talking about the next day. There would be many kisses from many girls but yours remains the standard bearer. Forty years on and I can still feel the sweep of your hair against my cheek when you leaned in, the taste of watermelon Jolly Rancher, the shocking intrusion of your tongue in my mouth. You weren’t supposed to let anyone inside when your parents were at work, up the street at Kodak, but I was cold and you relented. We didn’t kiss again that day and I was glad; even back then, I was a romantic, and didn’t want to water down that first kiss with others, at least not right away. We shared a can of Dr. Pepper and a cigarette. You showed me a bulk package of condoms on your mother’s dresser, not individually wrapped but sort of folded up neatly against each other like matchbooks. Then without warning you produced a safety pin and began poking holes in the condoms. You were laughing. You wanted a brother or sister, you said. The enormity of this act was not lost on me but that look in your eye as you jabbed at the rubber, that frenzied determination, was too thrilling to interfere with. How lucky was I, to not only have a girlfriend, but a crazy one to boot? And that fall, long after we had both moved on to new loves, you announced to the class that you had a baby sister, what a happy surprise she’d been. You turned to look at me across the sea of desks and I felt like some proud papa, part of that conspiracy of conception. When she was old enough and you told her what you’d done, as a big sister surely would, I hope you told her a little about me, and how I did not get in the way of her destiny. 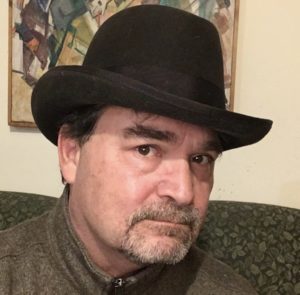 John Salter is the author of a novel, A Trout in the Sea of Cortez, and Alberta Clipper, a story collection. His work has appeared, or is forthcoming in, Chattahoochee Review, Massachusetts Review, North Dakota Quarterly, Florida Review, Meridian, and Pearl. He lives in Nebraska.