AS: Scales of the Ouroboros (SotO) is a collection of wildly different stories portraying each of the twenty-four crew members on the same ship. How does working in flash allow you to make the pieces both stand alone and work together?

MJ: The recent ubiquity of experimental forms in flash is exciting, and I find inspiration from the writers thinking outside the box. In a way, they’ve given me permission to explore the possibilities, which has helped me to develop the connective tissue making the pieces of SotO work not only independently but also linearly.

MJ: For twenty years, I’ve worked in the maritime industry. I’ve observed mariners and I’ve listened to their stories. A life at sea is undoubtedly fertile ground for storytelling, and I’m grateful to have kept my eyes and ears open all this time. Though the stories of SotO are based on true events or spotlight specific people I remember, I use the tools of fiction to bend the story where needed.

AS: You’ve been showcasing other authors on your socials. Who’s had the biggest impact on your work lately? Any favorite flash writers?

MJ: I’ve been featuring several Cupboard Pamphlet authors for a countdown ahead of the release of my own book, because each of those authors have influenced how I understand form. As for my favorite flash writers: Kathy Fish is one of my all-time favorites out there, but Lucy Zhang and KB Carle are breaking new ground with their creativity. I’m excited whenever they have new work out in the world.

AS: How do you know when a story is beginning to live on its own?

MJ: For SotO, I first had the structure of the story figured out: twenty-four pieces each depicting a crewmember of a ship circumnavigating the earth. As I added substance to this serpentine skeleton, most of the pieces lacked emotional urgency until revisions began. When I mined for specific details from my own maritime experience, the characters’ interactions with these details yielded a satisfying story that felt organic to me. A piece of flash will eventually reach a critical mass and take on a life of its own. Only then is it possible for me to see something in the draft that I can tame, something I can make crystalline.

AS: Endings, especially in flash, can be tricky. How do you approach them?

MJ: I don’t care for flash that’s perfectly wrapped up or ends with a “punchline,” so I try not to work toward an ending when I start a piece. Instead, I’ll identify the heart of a story and build around it, like a three-dimensional puzzle. The story isn’t finished until I fit in the last piece, an action that has an instinctual finality. It’s the best feeling. 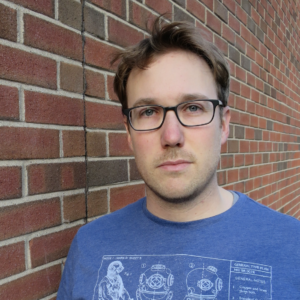 Mark Jednaszewski grew up in Tampa and studied marine engineering at Kings Point. He splits his time between Philadelphia and at sea, as the chief engineer on a deep ocean car carrier. He received his MFA from the Solstice Program of Pine Manor College, where he was the 2018 Dennis Lehane Fiction Fellow. His fiction has been nominated for Best of the Net, appearing in Mineral Lit, Gravel, and elsewhere. His fiction chapbook Scales of the Ouroboros will be published by The Cupboard Pamphlet in June 2021. Connect with him on Twitter: @ninjaneerski. 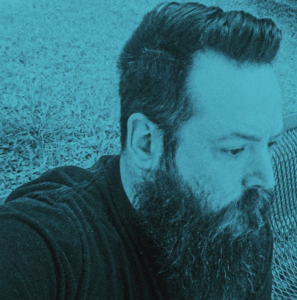 Andy Smart earned his MFA from the Solstice Low-Residency Program at Pine Manor College, where he was the 2018 Michael Steinberg Creative Nonfiction Fellow. His work has appeared in the American Journal of Poetry, Salamander, Lily Poetry Review, and elsewhere. Andy was a 2019 Pushcart Prize nominee. His chapbook Blue Horse Suite is available from Kattywompus Press, and his first book, The More You Hate Me, a memoir in essays, is due out in 2022 from Unsolicited Press.