The man that I love is a man who loves everything. Before we lived together, he warned me about his attachments, but I didn’t believe him. His apartment was too bare for me to believe him. When I moved in, I wanted to buy new things: sheets no other woman had slept on, and a glass for every kind of drink. Instead, we drank our orange juice, wine, beer, even our coffees, out of the same four chunky plastic cups.

He allowed me new sheets because I promised not to throw the old ones away.

He isn’t cheap. He spends on trips, tickets, and food, but he won’t buy things because he’s afraid. When he was seven, he found a teddy bear tied to a telephone pole. It was raining, and the bear smelled like mildew, and bird shit, and all the other smells that emanate from the wet city streets. He untied it and carried it from class to class, from bus to bus, until he was home and rancid. He told his mother that he took the bear because he didn’t want it to be sad.

He knows that objects don’t feel. He outgrew that delusion, as children do. Now, when he sees objects in a mud puddle or beside a dumpster, he imagines the history of the person who owned it. Maybe this shell lamp was handmade by a mother who wanted her child to remember the only vacation they’d ever be able to afford, he tells me. Maybe this broken glass bear was once a Christmas tree ornament, or a necklace charm. Maybe the woman who owns the necklace still wears the other half, even though it stabs into her chest, because she loved it that much.

Everything in our apartment is rescued and decaying. The couch spits bits of itself every time we sit on it, and I have to wait until he isn’t looking to sweep up the splinters. When I vacuum the recliner, I suck half of it up. I don’t know how many more cleans it can take before it’s only a fuzzy spot in our eyesight.

I love that he loves deeply, so I respect his wishes, and no longer bring things into our home. This took time. I tested him.

My mother asked me, “Does a man who loves everything, really love anything?”

I told her, “He loves everything just the same.”

She asked, “Does he love you as much as he loves a TV?”

I answered, “Just the same.”

He threw my phone once when he caught me window-shopping online. He didn’t want to see something in my cart and fall in love. Moments later, he looked into its big blank screen like a man looking into a cyclops’s eye, and he apologized. He didn’t need to apologize to me.  When he ran his hand down the cracked screen protector, he might as well have traced the scratches on my wrist. I felt it, just the same. 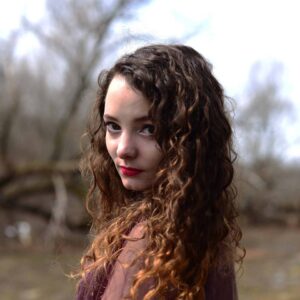