He tells me that his mother carries a lock of his dead father’s hair coiled inside the folded bills of her wallet, how she’ll forget about it altogether and have to pluck it, embarrassed, from the spill of dimes and nickels on the check-out counter at the grocery store. Sometimes she’ll tell the startled cashier that it’s her hair from when she was a natural blonde, when her hair hung thick and straight to the ass of her tie-dyed mini-skirt, when she went by the name of Star Aster and danced naked in the rain at Woodstock. Way before she was somebody’s mother or the widow of a man who left her with nothing but a shoebox full of unpaid bills and three photographs from their honeymoon in Vegas, their faces smudged gray with fatigue after a night at the craps table where they wagered everything but their round-trip Greyhound tickets from Ann Arbor. Back when his blond hair hid his eyes, curtained his face as he kissed the dice. Back when she would bet anything was possible, when she still believed love was a kind of magic. 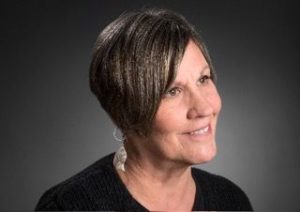 Sarah Freligh is the author of Sad Math, winner of the 2014 Moon City Press Poetry Prize and the 2015 Whirling Prize from the University of Indianapolis. Her fiction and poetry work have appeared in Sun Magazine, Hotel Amerika, BOAAT Journal, diode, SmokeLong Quarterly, and in the anthology New Microfiction: Exceptionally Short Stories (W.W. Norton, 2018). Among her awards are a 2009 poetry fellowship from the National Endowment for the Arts and a grant from the Constance Saltonstall Foundation in 2006.