They were passing through town. This was at the beginning of the last century, on the vaudeville circuit, two performers, married. Or not. They were a song-and-dance act. Not a very good one. He wore a moth-eaten clown suit; she was an off-key contralto. They had a baby, a son, two, three months old, and they’d fix up a crib for him out of one side of an opened suitcase, then go on stage. They dragged the kid around from city to city and by the time they got off the train in Pittsburgh they’d decided that this was no life for a child. More than once they’d skipped out on the hotel bill; more than one meal was ketchup soup. They had a three-night run at the Warner down on Forbes. There was a newsstand outside the theater and one night while Maggie was flipping through the late edition of the Pittsburgh Gazette, she got an idea. The next day, without telling Buzzy, she went to the Gazette’s offices. She rode the elevator to the fifth floor. At the end of a dark hall sat a man behind a desk. His hair was sharply parted and he wore sleeve garters. He asked how she wanted the ad worded. She pointed to the one she’d seen in the paper and said, “Like this. Only it’s a boy.” This cost her thirty-five cents. When she got back to the hotel she told Buzzy what she’d done, took the baby, whose name was Sam which was supposedly Buzzy’s real name, and cooed to him that she’d done the right thing, though a well of grief had already drilled to the bottom of her.  Buzzy sat with his head in his hands. The next day a woman met them in the lobby. She wore a fur-trimmed coat, a cloche hat. They went up to the room where Sam lay sleeping on the bed. He wasn’t one to cry and when he opened his eyes he seemed to understand what his mother and father and the strange woman, who smelled of rosewater, had in mind. The woman took an envelope from her purse. There were two fifty-dollar bills in the envelope, which she handed to Buzzy who supposedly handed them back. The woman, whose name was Florence Engles, picked up Sam, nestled him in the fur of her collar. Sam looked over at his parents with his gray eyes as if trying to impress upon himself this lasting image which he carried through his days, his mother, his father in the room of a hotel whose bill they did not pay, a place that smelled of dust and defeat. Later, whenever asked, he said that Pittsburgh was the city of his birth, that his childhood had been privileged, that his mother had been loving, that he had once been part of a song-and-dance act, though of this he claimed no memory. 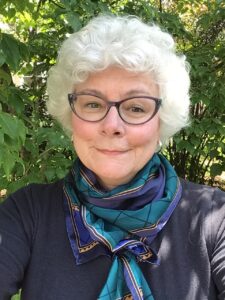 Rosanne Scott worked for several years as a freelance writer and editor for a number of book publishers, magazines, newspapers, non-profits and government agencies. Her fiction has appeared in The Threepenny Review, SmokeLong Quarterly, and elsewhere. She lives with her husband near Washington, DC.