The stove was set to low from Friday at 6:00 p.m. until Saturday at sundown.  It cast an orange glow on the soup pot, which reflected the time in square, chopped green.  My father’s Saturday mornings were perfectly timed.  He would shower in the dim bathroom light with the masking tape over the light switch, ensuring that nobody turned it off or flipped it on out of habit.  He buttoned his best Shabbos suit (slate gray with the repaired armpit), he slid on his black dress shoes over black socks (hiding a hole at the bunion), and with perfectly-timed steps, he hurried to synagogue.

When my sister snuck through the living room window, her right heel catching the lower pane and shattering it, the soup pot read 2:13 a.m. backwards.  My father, mother, and I ran to the living room to find her: laughing, one leg bleeding, eyes glassy, and an unlit cigarette in her mouth.  The small lamp for puzzles, reading, and post-Kiddush naps reflected on my sister’s face like when she told me ghost stories (stories of demons in songs played backwards, stories of powders placed in her eye so that she could become a bird, and stories too scary to remember).

My father grabbed my sister by the hair, which was green, blonde, and dark brown.

“Not here,” my mother said, unable to protect her daughter; instead, she tried to keep the neighbors from listening through the broken glass.

The two took it to the back room.  I shared that back room with my sister, but she was never around anymore, so it mostly felt like my own room (except when I snuck under her bed and tried on her blue eyeshadow or pretended her roach clip was an alligator with feathers for hair).

My mother wrung her hands and worried over the noise while her daughter and my father fought.

“You are not my father,” my sister yelled this time, or each time.

“Don’t hurt her,” my mother said, but only quietly.

My sister turned on the radio.  Black Sabbath.  It mocked my father.  She turned it up and he threw it against the wall.  He wanted, I think, to throw her against the wall, to break her against the wall.  The speaker left a round indent in the plaster.  It shattered; the handle landed near my pillow. Maybe my sister shattered a little, so I slid under my bed.  I saw a feather.  It was orange and soft and it glowed in my hand like a yahrzeit candle.

My mother told them to keep it down.  She worried over the window, the wall, and our landlord.

My father said it was Saturday, Holy Day.

My sister said she wasn’t my sister.  He wasn’t her father.

I think my sister must have escaped through the living room window.  When I slid out from under the bed, she was gone.  My father buttoned his slate suit and my mother bent over the stove, quietly stirring chicken soup. 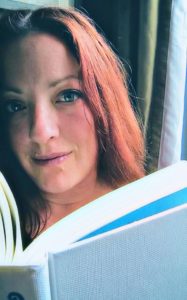 Shoshana Surek is a first-generation American and the daughter of a Holocaust survivor. She resides in Littleton, Colorado, with her husband and three children. She earned her MA in Creative Writing from Regis University and is completing her MFA in Creative Writing at the Mile-High MFA program in Denver. As a comedy writer, she was twice a finalist in HBO’s Comedy Arts Open and a finalist in the Miller Comedy Heavyweight Championships. Her writing has appeared or is forthcoming in 2e, University Press, and Friction / f(online), and others.