I was from a small, barbaric town in the Midwest where men struck the posture of ravens with true wing and claw. “We must conquer our bread,” they said. They did it all day long. Rabid supporters of sanctified dirt and cult. I was the color of mud and blended into the morning.

I saw her at the well. A face with moving parts and an astral outline. She stood in the half-shade, colored by the dim. I say she spoke my name, but all the others say different.

I asked the ragman if he’d seen her. The fishwife. The town criers. The hapless. I asked total strangers whose only worry was the rain. I fingered the thing I’d stolen the day before. I rubbed it like a magic lamp and waited for the sorcery to release. Nothing happened. And no one I spoke to could rightfully say they ever saw her.

They keep the records in the tiny houses no larger than monk cloisters. A patchwork of front doors facing every which way. Roof lines a jumbled crowd of black hoods. Only an occasional window lit as if a cunning eye. One of these doors has the room that has the drawer that has the certificates.

I chose a door. I knocked and the door swung inward, revealing a dark kitchen. The sound of water dripping from the ceiling. No one was inside. I was overcome by a need to rest my head on a pillow and doze for a while. People warned me this would happen. These old structures are haunted or poetic.

A young girl came down to the kitchen to read my cards. I explained my condition.

“You won’t ever find her or anyone.” She smiled. “But there may be a way through the tunnels.”

“No. If they catch you in the tunnels, they put you in chains. Even I know that.”

“What business do you have with her?”

She stopped laughing long enough to speak. “To think someone like you would ever have a chance to see her about nothing.” Then went right back to it.

“I only want to see her,” I explained. “With my eyes,” to which I pointed.

“Because people say they never saw her. But I did. My name was said. Have you ever seen her?”

She sat quiet, staring at something. Nothing. Over my shoulder. “No.”

“Do you know anyone who has?”

“No. But I live here.” She pointed to the only window. “Not there.”

Her face was smoke and she said no more. But the motion behind her third eye made the faith of churches fall to pieces in my hands. I left that place and returned to the rain.

A memory I can’t quite grasp. A hint of something that isn’t there. It was, but never was. I know I will grow jealous if I see her talk to other men. 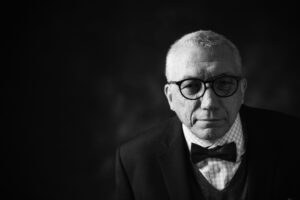 RW Spryszak’s work has appeared in the small press since the 1980s and included Slipstream, the Lost and Found Times, Version90, and others. His novel, Edju was published by Spuyten Duyvil in 2018. He is managing editor at Thrice Publishing, and can be found in more detail at www.rwspryszak.com.