I bought a hamster yesterday. It was all a bit spontaneous: post-break-up pet shopping. I wanted a goldfish, a no-nonsense water-dwelling creature to keep me company. But the salesman in the shop saw me looking at the water tanks and steered me towards the rodents. I made eye contact with a chestnut-colored guy with pointy ears and a stubby tail. The salesman told me they’re incredibly smart. I figured I could have some intelligent conversation now that the flat was empty. I purchased the cage, the wheel, the bedding, food, and all manner of toys.

So far, he’s unnamed. Can’t decide between Winston and Fluffles. I’ll decide in the coming days. The salesman forgot to tell me they’re nocturnal. First night, the little ball of fluff kept me awake until morning running on his wheel. So, the second night I took out the wheel and replaced it with a pen and notepad of paper. “You’re so smart,” I said to him, “You can write instead of exercise. That’s what the rest of us do.”

Joke’s on me. I woke up the next morning and he’d written a novel. Signed under a pseudonym, of course. There’s no way a hamster was called Jack Baxter. He left me a note, asking me to send it off to a publisher. He’d even left me money for a stamp. Not entirely sure where he got it from. But as I looked down on his cage, on my little hamster who was standing on his hind legs and gazing up at me with his small, black eyes, filled with intelligence and compassion, I couldn’t help but think… There was no way that little bastard was getting published before me. I burned his novel in front of him, then flushed the ashes down the toilet. He didn’t say anything.

When I woke up the next day, the hamster had gone. His cage door was open, remnants of straw and bedding strewn across the carpet leading up to the front door, which was slightly ajar. He’d even left me another note. Told me was running off to London, or New York, to follow his dreams. He’d signed it “I will never forget you. Goodbye, Percival.” I was shocked. I was aghast. I could not believe it. He didn’t feel like a Percival. But I guess you never really know someone.

I bought another hamster. I went to a different store. I couldn’t face the accusatory glances from the salesman in the previous shop. This little guy was dark brown and squeaked as he ran. I went with my gut instinct and called him Frank. I gave him a pen and paper, hoping to inspire brilliance. I woke up the next morning to find he’d joined a pyramid scheme and was claiming the Earth is flat. Turns out not all hamsters are smart. 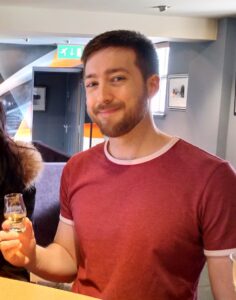 Samuel Edwards was born and raised in Leeds, England, and no matter how far away he gets, he is always compelled to return to Yorkshire. He has a Bachelor of Arts Honors Degree from the University of Leeds and enjoys dark coffee, even darker chocolate, and long walks. Samuel writes mainly to impress his pet cat, a feat he will never accomplish. He is currently working on his debut novel, Road Trip to Oblivion.