On prom night, my date picked me up in his father’s Cutlass and drove us 90 miles down the interstate.  I didn’t care.  I didn’t really know him that well.  His name was Donald, but everyone called him Richie, and the whole car smelled like hamburgers and latex, and we ended up at the Buddy Holly crash site.  He parked on a dirt road.  There was fucking corn everywhere.  We left the thing running because we figured we could at least dance a little, and it was an oldies station, and I didn’t know any of the words.

“Whatever you want, baby.”

And we danced, and there was nobody around.  He said he had some vodka in the trunk.  I’d heard it rolling around back there and thought it was a bowling ball.  Or an old can of gasoline.

“Someday they’re gonna build a hotel out here,” he said.  “Just you watch.”

“You wanna see the spot where he landed?  They say they only found pieces.  Glasses all broke to shit.”

“I saw a dead body once.  In the morgue.  At Mayo.  They keep them in these freezer drawers, and they all look blue, blue, blue.”

“I was there, sunshine, and don’t you remember?  You held my hand and said, ‘This is the worst kind of field trip.’”

“Of course it was you,” he said.  “It was always you,” and I thought about how men get off on feeling like they’re in the movies.  They all they think they’re just exactly like James Dean.

He asked me if I wanted to make out under the giant pair of horn-rimmed glasses, and I said I’d rather roll around in whatever place they found the Big Bopper, but he didn’t happen to know where that was.

“There’s this motel down in Clear Lake, though, and all I told your pops was, ‘Sir, I’ll have her back by dawn.’”

I looked at him like he was an insect.  Or a scorpion.  I heard crickets, and it sounded like they were doing it, and I pictured them eating each other afterward, but then I thought maybe that was spiders.  Or crabs.  Or else just kind of something else.

“Take me home now,” I said, and he did.  I don’t know why, but he listened, and the drive back was silent, but not angry silent.  More like sexy silent.  I kept staring at him, and he’d look back at me, and we’d drum our fingers and smile, and all I wanted was to turn west at Albert Lea and just take the interstate to Wyoming.  To Montana.  To Big Country and Big Sky and just mute and eye-fucking and flying straight off the edge of the map. 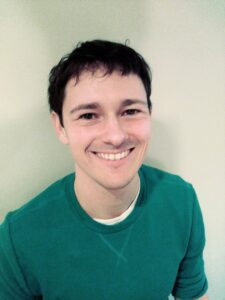 Brett Biebel teaches writing and literature at Augustana College in Rock Island, IL. His (mostly very) short fiction has appeared in Hobart, SmokeLong Quarterly, The Masters Review, Lost Balloon, and elsewhere. 48 Blitz, his debut story collection, is available from Split/Lip Press. You can find him on Twitter @bbl_brett.