Ever since my story appeared in the news, my life has been ruined, even though I stopped drinking. Everyone knows me as “that drunk.” The crow and night creatures agree, as do my ethereal companions. No one cares who you were before you took to demon alcohol.

I had been in a daze after being fired. Before dying, I worked at an electronics company, where I also drank. On the day I was fired—I was drunk then—I hurtled myself onto the commuter train tracks. My poor wife followed, attempting to grab my arm and stop me. She fell and was hit. She died one second before me, at 4:23 in the afternoon—gray sky, some yellow poking through—on a Wednesday.

I don’t know where she is now; perhaps she is in heaven. While down here, with the shadowlings with guttural voices, I am known as that guy.

But she had been trying to save me. That was something. Isn’t it? Unfortunately, the news didn’t mention that.

My wife worked for the railroad, as a project manager. She had emerged from the building to stop me. If she had lived, the railroad would have fired her—owing to her husband tarnishing company property—and we both would’ve been unemployed then. What a life!

They don’t have lager or corn whiskey down here. We drink air, rainwater, sour thoughts. I have a good ear and, amid the buzzing sounds of communal putrefaction, the smallest snide comments nip my lobes. Must I listen for all eternity?

Sometimes I imagine my wife in the shower. Rubbing shampoo in her hair. That’s what I miss most—the little details. I miss what I hardly lived.

My coworkers found the bottles in my drawer, all my hidden things. They attended my funeral ceremony. My brother came. Well, I could not have been so hated—I had a funeral, people came. That was something. 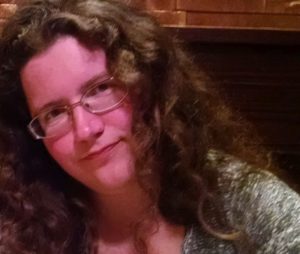 Heather Sager is an author of short fiction and poetry. Her recent work appears or is forthcoming in Painted Bride Quarterly, Heavy Feather Review, Mojave River Review, and other journals. She lives in Illinois.