Before Dr. George Parkman disappeared from Boston on that fine November afternoon, the Friday before Thanksgiving in 1849; before he stopped for groceries for his family; before he went to Quincy Market and bought a most extravagant head of lettuce for his institutionalized daughter, Harriet; before he went to the medical college, where ghastly dissections were performed, flesh ripped from bodies and carcasses dumped in the Charles River; before he went to collect a debt from Harvard chemistry professor John Webster, a long-time friend and fellow parishioner at New North Church—

Before Ephraim Littlefield, janitor and Resurrection Man, read of the $3,000 reward for the discovery of George Parkman’s body; before Littlefield spent the day digging in the dark through five layers of brick among sewage, waste, and body parts; before he spotted a pelvis, genitals still intact, in the bowels of John Webster’s private privy—

Before Marshall Francis Tukey was hired to clean up the city and take care of the Irish; before he and his Constable, Deratus Clapp, arrested John Webster; before they discovered teeth and hair in Webster’s office furnace; before they found the dismembered body parts seemingly belonging to George Parkman; before sixty thousand people witnessed the trial in fifteen-minute shifts for eleven days; before the jury deliberated for three hours, two hours and fifty-five minutes of which they prayed; before John Webster was sentenced to death and hanged before a crowd of thousands at the Leverett Street Jail—

—there was George Parkman, landlord and shylock, who tended his debtors with a watchful eye.

George Parkman, not lovingly referred to as “The Chin,” ill-natured, stingy, and shrewd. A man not opposed to taking a mother’s last dollar for groceries or medicine when the rent was owed; a man determined to call in his note to John Webster. And so he followed him in the street, appeared at his home, interrupted his lectures, generous no more. There was the amiable and round John Webster, who had wasted his inheritance on minerals and rocks and could not survive on his Harvard salary, for he was unable to deny his wife and four daughters their lavish parties or beautiful gowns. John Webster, who had nothing left to mortgage and who sought out the benevolence of friends like George Parkman when institutions would no longer lend to him. John Webster, who confessed to the killing but declared his crime an act of passion, if only to end Parkman’s constant taunting.

Afterward, the City of Boston was known for gentlemen butchering gentlemen, and Webster’s lab became a destination for the likes of Charles Dickens. Afterward, Governor George Briggs noted that capital punishment united the imbecile, the Negro, and the Harvard professor. Afterward, a collection of twenty thousand dollars was taken up for the widow Webster and her girls, the widow Parkman contributing five hundred dollars to the fund. Afterward, John Webster was buried in an unmarked grave on Copps Hill so the Resurrection Men wouldn’t nab him. 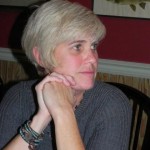 Sarah Banse is a Senior Reader at Ploughshares. Her work has been published in The Harvard Review, Ploughshares, the Sun and the Boston Globe among others. She lives west of Boston with her four children and is plugging away on her first book.