Dear Son, the letter began. I want to apologize for being unable to meet you. I am a spy for the CIA, and the country needs me to stay overseas.

I stopped writing. It was too unbelievable. I scratched it out and began again.

Dear Son, the new letter began. I’m a criminal and wanted in twelve states. I would love to meet you, but if I return to Ohio, I’m facing a life sentence.

I put the pen down and squinted at the words. How was that any better than the truth? I tore up the paper and crumpled it into a ball. I took my cane into the kitchen and poured myself a cup of coffee.

Outside, my neighbor was pulling his garbage down an empty drive. Last week, my wrecker impounded his Nissan. He couldn’t pay the forty bucks, and I didn’t loan it to him. I sipped the coffee and glanced over to my fridge. The picture from Fanny defied gravity. A nine-year-old in blue overalls, pinned under the edge of a Welcome to Las Vegas magnet.

I slipped it from the magnet’s hold and turned it over. Fanny’s message was on the back. I could recite it without looking.

“Your son, Dylan,” I read, whispering along. “He’s been asking about you.”

Holding the picture with both hands, I carried it over to the notepad. I sat down and propped it up against my coffee mug. The small human eyes were blue and focused to the left on something outside the frame. I wondered what it was.

I picked up the pen.

Dear Son, the letter began. The truth this time. I’m sorry we’ll never meet. If I were a braver man, I would book a plane tomorrow or at least give you my number, but the truth is, I’m not a man worth knowing.

Look to your mother. She is a good person and everything you’ll ever need to know in life, you can learn from her. She is made of the right stuff. I know school will be hard, but if you’re anything like me you’ll grow tall and strong, and before long no one will think about messing with you.

There will come a day when you will want to find me again. You will be older and angrier, and you will pull this letter out from wherever you decided to hide it. You will look up directions to the return address on this envelope and hop in your car. You’ll drive the whole way without stopping.

I flipped the page over and wrote fast. I could imagine him now—window down, elbow out. The blue of his eyes focused on the road. My pen moved on its own.

You’ll have to park on the street. Make sure you’re fifty feet from the hydrant. You’ll follow a brick walk and climb three concrete steps to use an old brass knocker. Knock as many times as you like. I’ll hear you. 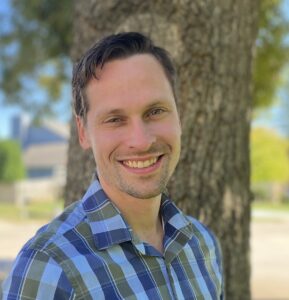 Nathan is a middle school English teacher in central Ohio, where he lives with his wife, who is also a teacher. His fiction has appeared in Allegory Ridge’s fiction anthology, Open Pen, Penumbra, Ponder Review, and Passengers Journal.