At 22 all I could find was babysitting. Today I met Rollie’s mother in her splendid kitchen. She was a perky blonde dart-about. Rollie shot around in his walker, a fat bugger. He attacked my wingtips. I gave the kill-you-kid look, but Rollie bubbled laughter and threw spit and slapped his tray.

“My Rollie puts things in his mouth,” his mother said, doing a little itch dance. “Nothing should be down.”

I worked my hands like pistols at her: “Gotcha.”

Rollie’s father appeared at the door, drunk already. He slid down the frame and took his wife’s boot under his chin and made chewing motions. Rollie rammed him and said, “Dak!”

I sat on the sofa reading Tat magazine. Rollie cruised the expanse of hardwood and repeatedly slammed the furniture and left trails of drool.

“So, Roland is it?” I chuckled. “Roland. What a name. We should call you Roly-Poly, you know that?”

Rollie picked up speed and did a three-sixty, slicing into my outstretched leg.

I picked Rollie up and placed him in the playpen. He flopped down and began to scream. I gave him the pistol fingers. “You go.”

I watched a show where angry wives put out hits. I pictured Rollie’s parents, father with his head blown off, but still smiling.

Rollie was digging under the pad of his pen, concentrated as hell. Before I could react, he popped something into his mouth. He turned blue. I jumped up and said, “Fucker!” I tried to remember my CPR. He slumped like a doll. I carried him to the sofa for the choking scenario, and out popped a hard piece of cookie. I had to breathe for him for thirty seconds. He opened his fat little eyes and slapped my face.

Ten o’clock and Dad came crawling through the door He looked at me and slurped, “Awwwwww… so cute.” Because Rollie was sleeping on my chest.

Before that, Rollie had not left me alone, had explored every inch and pockmark of my face, baby-talking me. He said he wanted to be like me. I told him no he didn’t, it was a lonely life, I was sad much of the time. Don’t be sad, he said. You have me. I’ll never leave you. Are you funning me, Roland? He said, You’ll see.

Mom tried taking Rollie from me. It was time for me to go. He would not let go. We could not break his grip. And he screamed until he was blue again. He wouldn’t stop screaming until we left him alone. So, I spent the night.

I’m still there, watching him grow old. I’m happy that I have a purpose. During the day I get soused with Dad. Later Rollie chases me down and stomps my shoes. 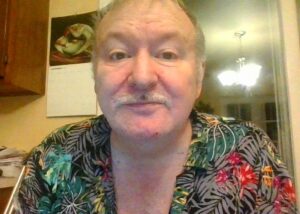 Gary Moshimer has stories in Frigg, Pank, Smokelong Quarterly, Eclectica, and many other places.