The son finds his mother hanging from a pipe near her bedroom ceiling by a leather belt he made for her last Christmas.

Mom, why did you kill yourself? asks the son.

Because I could not accept the limitations of this life, says the dead mother.

That makes sense, says the son; there are many limitations. For instance, hunger, money, and the unbearable loneliness I often feel at night.

But we could have maybe talked more before you hung yourself. I could have touched your face or made you oatmeal sprinkled with cinnamon for your last breakfast.

No, they won’t, but you could have been braver.

Yes, I could have been braver.

Being very tall, the son stands on his mother’s bed and unties her from the pipe, now leaking.

You didn’t have to do that, says the dead mother.

But I love you, says the son, even if I do not always express my love as I should.

And I love you, even though, like yours, my love is often ugly.

The son carries his dead mother to her car outside their sagging apartment building.  Thankfully, the car starts––it has a habit of not starting.  The son drives to the country where the dead mother asks him to stop beside an old oak tree.

Yes, this is where I would like to be buried. She likes how the tree stands alone in the field.  Having no shovel, the son begins to dig into the tall yellow grass with his hands.  The dead mother watches the clouds change slowly above her, wishing God had made her a cloud rather than a mother who didn’t know how to be brave. 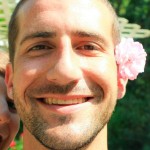 Vincent Poturica’s writing has recently appeared or is forthcoming in alice blue, Birkensnake, Columbia Poetry Review, DIAGRAM, and New Ohio Review. He lives with his wife in Long Beach, CA.