Of what she left behind, she is certain the houseplants have suffered most. Even now, three states away and no longer concerned with the weather in Oklahoma, when she closes her eyes he appears—torso stretched through the passenger-side window, ruined hands opening her handbag, searching for her cigarettes and enough cash for a trip to the bar. So, after her shift, she sits in the Safeway parking lot gripping the wheel of her rough-idling new-used Ford, eyes shut tight, studying his hairline and the line of his neck—his throat like a Pharaoh, declaring.

She had left for good reason. She was tired. Tired of finding out. Tired of stories.  Tired of the girls at the deaf school outside town. How did they dance like that, anyway?  Tired of him playing her numbers at the Indian casino off the interstate—black twelve, red five. Tired of waiting, flitting like a bird with a beak full of twigs and feathers. She was at home not waiting when she decided. It was during an afternoon thunderstorm.  She put down the Almanac, open to a table titled “Elements in a 150-Pound Person,” and stood facing the window. She watched it pooling in the low spots across the yard, collecting steadily, and running off the nearly bare, slanting porch. It was then that she stopped wanting him to paint and repair it. She started to pack. There was the process of elimination. She surveyed the room. She considered the stems of the tulips in her grandmother’s cut-glass vase, their arch suddenly more beautiful, purposeful, bent with the weight of dying flowers, their gentle curve bringing the blossoms close to the tabletop before letting them go. She took the vase and three empty antique picture frames. She wrote him a short note on the back of an envelope from Publishers Clearing House and placed it on top of the oil-stained manual he’d left on the kitchen table, open to a section titled “Smoke and Other Indications.”

She spent a week or so at the motel just outside town. The room smelled like new work—caulking, fresh paint, sawdust. She liked it. He came looking for her once before she left town. He broke into her room, went through her things. She was out, and glad to have been. When she came back the room smelled different—bourbon, wood-smoke, sweat. That was the first night she slept.

The next morning she started west. After days of driving, she reached for the map in the glove-box. Now, months later, sitting in the Safeway lot, she remembers the moment with photographic clarity: as the first whip of lightning spoiled the darkened landscape, she unfolded the fragile creases to search—trying to locate herself along the red and gray lines just north of where it was torn. She’d gone the wrong way, but already too far to turn back. 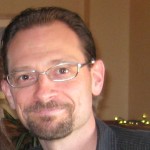 Jason Marak’s work has appeared in The Paris Review, Raritan, Salmagundi, and online at Action Yes. He lives behind the Redwood Curtain in Humboldt County, California.