The people were made of gas. They looked like people, but they floated and dissipated. They filled up entire rooms and, when they were finally captured, impermeable plexi-glas beakers. Some beakers were small, and the people in those beakers were concentrated, dense, and prone to quite severe bouts of anger. Other beakers were the size of medium-sized moons, filled with a single barely visible person stretched out inside the plexi-glas shell like a diminishing echo. Beaker-makers had decided to make the beakers out of plexi-glas after many tries with glass-glas, which tended to shatter easily, especially when coming into contact with other glass-glas beakers full of people-gas. Beakers colossal and miniscule alike would shatter, forcing the people to float out into the air, to mix with other gaseous entities, to enter the cavities of solid-people, to sometimes stretch and other times scrunch, depending on the elements around them, dependent on the currents controlling the air. This naturally made it very difficult to recapture people, and sometimes it was unclear whether one was getting a pure person, or a mix. We tried hard to separate the individuals, but of course it was impossible to be entirely sure. The nigh-unbreakable plexi-glas beakers were developed to avoid this kind of confusion—they bounced and flexed when crashing into each other—but to a certain extent it was a lost cause because the damage had been done, the gases had been exchanged, and there was really no way to go back. 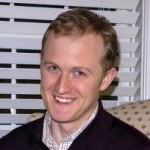 Garrett McDonough’s writing has been published in The Believer, Jabberwock Review, and SAND. He earned his MFA in creative writing from Columbia University, where he also taught undergraduate writing, and has held fellowships at the Woodstock Byrdcliffe Guild and the Hambidge Center for the Arts. He lives in San Francisco and is currently at work on his first novel.