He sits at a folding table in an empty office overlooking Cabrini Boulevard, his back to a sky so bright his face fades to black. Behind me in the hallway, a stack of files drops to the floor. The sound is like a gunshot. I startle and settle. Fight or flight. The man wraps my name in a question and slides it across the room. I say yes, hello, and remind myself that there are so few real choices. He points at a metal folding chair and I sit, holding the sides with both hands. The end of his pen taps on the table in an uneven rhythm. I stare at it, welcoming the possibility of hypnosis. Wishing he would do something whimsical, entertaining with his power. Turn me into a chicken, clucking and pecking across the room like they do to people on TV. My eyes adjust. The man’s face and his pen are red. Pigeon wings clap upwards across the expanse of blue sky. I remember that my grandmother told me that prayers were wishes with wings. As a child, I would chase the birds at her backyard feeders—goldfinches, cardinals, blue jays—trying to catch one to look it in the eye, tell it my prayer. They all flew away. At bedtime, she said to pray the most important thing first, so I would think about the boy with the red bicycle on Yellow Rose Court. The boy, the body. The single letter that changed everything. At night I pressed the idea of the boy’s red bike with a Batman license plate and silver streamers between my palms. Night after night I sent up his prayer first until the prayer for the boy and his body succumbed to gravity, falling to second, third, fourth, in line. He became earthbound. Dust to dust. I grew older. Old enough that I no longer believed in prayers or wishes or the godliness of birds. My freckles faded and my shoes pinched my bunions. My grandmother stopped using Lady Clairol and let her hair turn gray. The man in the room is watching me. My résumé flutters in his hand and I watch it fall to the table. It’s only temporary, he says, sliding a form toward me. He hands me his pen and I scratch red words into the empty boxes. When I leave, the bicycles stacked outside the apartment buildings on the way home are ashamed. I reach in my pocket and clench the man’s red pen in my fist like a knife. I don’t know whether my possession of it is a prayer, an accident, or a rebellion. Not that it matters. I stomp at a cluster of pigeons pecking at a hot dog on the street. They fly away. 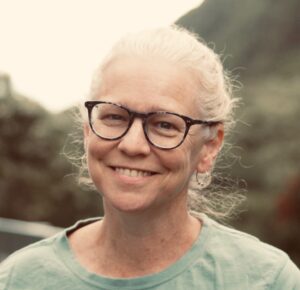 Christina Kapp teaches at the Writers Circle Workshops in New Jersey, and her work has appeared in Passages North, Hobart, Forge Literary Magazine, The MacGuffin, PANK, Pithead Chapel and elsewhere. Her fiction has been nominated for Best of the Net awards and a Pushcart Prize. She welcomes you to follow her on Twitter @ChristinaKapp and visit her website: www.christinakapp.com.