For eleven of the year’s months the farmhouse received packages ordered from booksellers online. The farmer’s wife emptied them daily, stacking the empty crates and boxes outside the garage, where they sat, day after day, week after week, in the rain and the snow that soaked the boxes and swelled their cardboard fibers until they rose so high they slumped and leaned against the sycamores with such accumulated weight that the trees bent toward the driveway, slowly but definitively, over the path of the trucks delivering more packages. Meanwhile, their cargo—the books themselves—the farmer consumed like a plant devouring the sun. His wife tended the orchards, the animals, the fences, and fixed the meals to sustain his vigil at the table: by the window in the summer, beside the fire in the winter, always reading. In the early spring his wife measured his scalp weekly with a tape measure. By harvest time his head was full and round and violet, and for one month, he took a break from reading and placed his ripe head in the farmhouse press. His wife turned the crank, one turn every hour, as a blue-black oil slowly seeped from her husband’s ears. By the end of the harvest his head was flat and empty again and he returned to his vigil while his wife barreled the viscous liquid and set it in the cellar to age. A small batch as usual; three hundred barrels max. But those who filled their pens with the rich ink soon found themselves buried in books that seemed to write themselves. 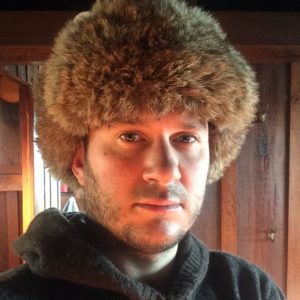 Scott Lambridis’ stories have appeared in Slice, Memorious, Cafe Irreal, Amazon’s Day One, Painted Bride, and other journals. His first novel received the 2012 Dana Award and is represented by Richard Florest of Robert Weisbach Creative Management. He completed his MFA from San Francisco State, where he received the Miriam Ylvisaker Fellowship and three literary awards. Before that, he earned a degree in neurobiology, and co-founded Omnibucket.com, through which he co-hosts the Action Fiction! performance series. Read more at scottlambridis.com.