Thirteen brown women live in a small town in America. They have a slight problem: each one of them is constantly mistaken for one of the others. The not-brown natives believe that a brown person is a brown person is a Mexican is a Native American is an Arab is an Indian is a brown person and all 3.5 billion brown people on this planet look quite alike.  After all, Columbus had got it wrong too when he thought Indians were Indians were brown were brown. And did you hear of the (Asian) Indian engineers shot in Kansas City by a man who concluded that they must be brown and so Arab and so terrorists and so brown?

I am one of those brown women constantly being greeted by strangers who mistake me for one of the other twelve. I am complimented on winning awards I haven’t won, condoled with for losing husbands I haven’t lost.  Meena is twice as tall as I am, Lata is twice as slim, Marie Carmen has colored her hair blond, but never mind, they are all brown and have been mistaken for me or for each other, or for Fatima Syed, or Patricia Pedroza Gonzalez.

One day, by way of experiment, I grow multiple heads, like the Hindu gods I worship.  I wear them gracefully I think—six heads to the left and six to the right, so twelve in all.  They are all brown, simple, plain brown. They sprout out looking like Lata, Marie Carmen, Meena, Fatima, Patricia Pedroza Gonzalez, and the seven other brown women. Only by some slight miscalculation on my part, I have lost my head. In fact, I have every one of the brown women’s heads, except my own, on my shoulders.

I walk down my college building, balancing my heads carefully. The outermost ears graze against the walls, and I wonder if I can find a wide enough mirror to check for a bruise. I smile and all the faces smile too. We frown twelve frowns; we laugh, displaying hundreds of white teeth; we shed a tear, just for the heck of it, to see if twelve other tears will be shed. We realize that so many brown faces have never been together at the same time in a hallway on the college campus.

A not-brown colleague is scurrying down the hallway. We wait, holding our breaths–is she going to realize, at last, that there is more than one of us?  She does not appear perturbed. “Hello,” she says pleasantly (she is always pleasant). She addresses me by name. “Nice to see you…!” She smiles and is gone, just like that. She’s recognized me, at last, and I am not even there. 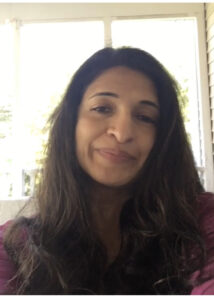 Brinda Charry was born and raised in India and has lived in the United States for the past two decades. She teaches English Renaissance literature and creative writing at Keene State College, New Hampshire. She has published two novels: The Hottest Day of the Year and Naked in the Wind, as well as a collection of short stories, First Love. She has also published poetry, fiction, and creative nonfiction. Her short fiction has won prizes in the BBC Short Story Competition, Katha Prize Stories Competition, the Hindu-Picador Short Story Competition, and the Commonwealth Broadcasting Short Story Competition. Her second novel was awarded the India Plaza Golden Quill Award. Most recently she was awarded the Ewing Award for the Literary Arts. She has also published three academic books and several academic articles, all of them critical commentary on English Renaissance literature.