They wanted to know how they looked. Those secret things pieced together from death, clinging with magic — bones and sinew and hair. Things fashioned only in the darkness and alone. So you carved them out of whale’s teeth, from bone and from antler. Grotesque creatures with grinning skeleton mouths, mouths full of huge teeth, too many teeth, and you carved faces for stomachs and webbing for feet and stretched fingers to shudder at the touch of. You carved things that had long ago fallen apart, and these carvings held no power but to fascinate the men who came over the sea.

And when those men made you leave your long houses and shiver all the winter in a tiny wooden cabin, you crept into the night, wrapped in sealskin, and your fogged breath made ice crystals grow on the weave. The ground of the grave was frozen, but you scrabbled till your gloved hands were soaked and scabbed, and you brought up what was buried there. The skeleton of a baby born too early, only to die in a wooden house, when the winds whistled through every crack and the fire waned. Stroked those bird-like bones, flimsy tibia, scapula, mandible, folded them into your sack. Into your sack with the rotting seal blubber and the skull of a bird, the pelt of a reindeer and the tangled hair you’d stolen from a plover’s nest, human hair, blonde hair.

And you wove them together beneath a night sky that arced with tendrils of light, sinuous green that slid through the atmosphere, violet and red, flicking like an eel’s tail. The souls of your ancestors glimmering above and the stars all frozen. You bound together those things, those dead things, and you molded a creature, a chimera, to swim the sea and stalk the land. The things you did to bring that monster to life.

You threw it in the ocean. Watched it squirm away. Out through the shallows and slipped beneath ice floes that creaked and cleft. Out through the dark water where ancient sharks circled, and killers with black and white bodies roamed. You thought of that man in his boat, hunting in your waters, living your land, and you willed the creature to pull him down.

But you didn’t know that your enemy’s power was greater. That the frightening thing you loosed would be turned back on you. That it was you, out in your kayak, who would feel the dragging grasp of long fingers wrapped around your leg.

Your body struggling in the water.

And when it pulled you down under the cracked white and down to the sea floor, where brittle stars crept and sea worms writhed, you opened yourself to the water, let it burn ice through your lungs. You almost welcomed the clench of limbs around your body then, that febrile monster, that thing of warped, beloved bones.

And the ocean folded around you both and the dark came. 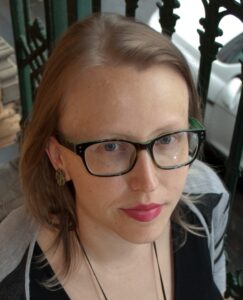 Verity Borthwick has previously been published in The Best Australian Stories 2017, Meanjin, Island and the UTS Writers’ Anthology. She started writing in her spare time while getting her Ph.D. in geology so she didn’t go mad. Verity currently spends her days playing with LEGO, making train tracks and reading Pig the Pug just one more time. Also taking care of her two sons. She edits and writes in whatever in-between spaces are left.