The first time your father heard a violin was right before Christmas in Ontario, walking by a church on his way home from university. He tells you while driving home from a particularly tearful violin lesson with the severe, red-cheeked teacher from whom you rent your instrument. “So cold and so dark,” he says, “but I stopped because we never had real music in Pingshan.” He claims, in the way that he always boasts of hardship to help you realize your own fortunes, that he returned weekly that winter to hear the night service, just for another glimpse.

Whereas you feel that your life has been nothing but lessons. Every Saturday your neck is stiff from clamping the instrument in place. Your wrist collapses unbecomingly; your fingers cramp. Behind you, your father transcribes each of your teacher’s critiques, notes collecting in drifts on each page. He writes the important bits in English so that you can read them later: longer bow, heavier arm, faster, softer, practice more.

“You’re not the one playing,” you say one day, jerking away as he tries to adjust the placement of your right thumb. He opens his mouth as if to speak, then turns and leaves you to practice alone.

At the end of your next lesson he asks your teacher whether she might take him as a student. He explains that he has been studying alongside you, shadowing your movements, practicing on his own with a yardstick as a fingerboard. A thick sunbeam glares from the opposite window and he bows his head slightly.

“I don’t teach adult beginners,” your teacher says without looking up, buffing her violin’s rosin-covered strings with a small rag. “Even those who self-study.”

You have never seen your father blush before. The next week, he waits outside in the car.

Months later you accidentally snap the bridge of your violin, slamming the case shut in frustration and drawing a bark of reprimand from your teacher. Your father inspects the pieces when you get home and combs the Yellow Pages for an instrument repair shop. He copies down a nearby address and slips the two slim woodchips into his pocket, tenderly wraps the bridgeless violin in its silk bag.

The next week, you present the repaired violin to your teacher, and she inspects the hairline fracture with narrowed eyes.

“You had a professional fix this?” she asks.

You reply automatically, “Yes, we did,” but suddenly you can see your father sliding the violin from its case in the fleecy gray hours of the morning, pressing a silk of Superglue between the halves of the bridge, blowing on it like hot soup; you see him harnessing the mended bridge to the violin’s body, strumming to tune, briefly tucking it under his chin. You see him stock-still in a blizzard, suspended in an amber wedge of streetlight, straining to hear a symphony from the outside. Snow gathers in the folds of his ears. 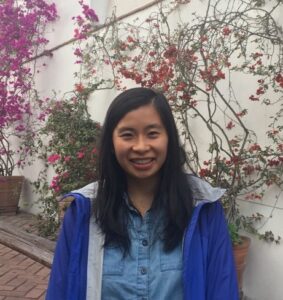 Anita Lo grew up in the Pacific Northwest and now works in New York City. Her writing has been published in Fractured Lit and Expose Magazine.