Hannah looked through the scope of her rifle, a Ruger 77/22 camouflaged to match the washed-out grey of the desert sand around her. A low caliber, but their quarry was fragile. It drifted roughly where her brother had said, high above the ground. Its two wings beat in slow, lazy flaps, each feather golden.

Her father’s voice was hot against her ear. “Look for where it’s gonna be. Not where it is.” Hannah took aim, held her breath.

In the car, Dave told her about the first time he went hunting. “It was a big bull, eight wings and just covered in eyes, all fire and geometric sound. He saw me aiming at his choir—it was just him and a couple of two-wingers—and charged at me. The noise was like nothing else. But I stayed calm and raised my gun and shot him right in the neck. He was still singing as dad and I drove up but didn’t sound so pretty anymore.”

Hannah stared at him with wide eyes. “Just one shot?”

“Just one.” Dave had cried when they’d found it dying, but he didn’t need to tell his sister that.

Their father watched the exchange in their truck’s rearview mirror, his eyes crinkling. “They go down easy. That was the deal we all made with God. We got metal, they got to speak His language.”

Hannah pulled the trigger and felt the powder ignite, the bullet rattling its way up the barrel. It left the rifle in a flash of fire, long before the concussive sound had reached her ears, and spiraled through the air in a perfect spinning arch, climbing high above the ground before Hannah had even realized the gun had fired.

As the bullet approached its target, the contrast between the two grew starker. The bullet was heavy and dark, notched and pitted from the speed of its journey, light enough to travel through the air but heavy with earth and the finality of its destination. It was singular, brutal; there were no hidden depths to a bullet.

Its target was everything that the bullet was not. Shining gold, so light it seemed to fade and flicker with the air, each wing a tern’s arc making paddle wheels in the air. Its body was perfection, radiant in its seamlessness, each limb screaming the flawlessness of its whole. On the surface it was organic, but beneath that paper lantern skin stretched inner architecture, columns and escherine stairs that formed veins. It was math given form, inexplicable and wonderful.

Hannah’s shot was just a little off. She clipped one wing, scattering golden clothoid feathers in a red spray of blood. The angel went down in a slow, weak spiral, its other wing fluttering pathetically. It didn’t scream or flail. It didn’t even break its song. She felt a burst of sorrow—they were so pretty—but by then the dogs were after it. 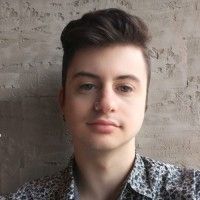 Cooper Gelb is an emerging writer from Chicago, where he lives with his cat, Linus, and works full time as a content editor. This is his first work of flash fiction, but his poetry has been previously published in The Southampton Review and his satire in The Black Sheep. You can find him on Twitter @queerandangry, and on Instagram @coopgelb2.