Once, on his Royal Enfield, a good boyfriend took me for a ride. He wanted to make a film about a girl who went through life without the weight of memory–light, joyous, free. Each of her remembrances were stored in a room of blue bulbs, each bulb a happy memory, bursting with light. She was allowed to unlock a bulb only when she was sad. Memory was the gift that would lighten her. He was driving us to a pool party. There were deck chairs and other boyfriends. And champagne and chlorine. I caught him as a good frame in a movie, across the pool, sunlight paddling his hair, his arms splashing towards or away from me. I tried to swim to him. While looking sexy. While bobbing my head to the beat of the song. I didn’t know how to swim.

but when I come back you’ll know know know.

I don’t remember right after. Much after, he thought my sadness was a dead end. That I could write into beauty if I tried. But no, I was a stubborn little bitch. I snorted grief. I let it take over me. Over us. How luxurious I thought that men could write a romantic poem and have every line rooted in love. Through and through. Each syllable a stirring of the heart. How unavoidable for a woman to want to write about love but come up against her body. I thought about the good boyfriend’s cinematic girl, her fingertips feathering the heads of blue bulbs. How it must feel to walk without your past, to walk as a man imagines you.

but when I come back you’ll know know know.

I didn’t know how to swim. What seemed like a little after, I woke up in a bed of shame and vomit. It wasn’t a bed. It was the passage between the men’s and women’s changing rooms. I found myself on a wet towel. Chlorine and champagne and bile and shame drowned me. And hunger. Not that kind of hunger. Just the precarious hunger of an empty belly before alcohol. He said eight vodka shots, who does that? I was an embarrassment, embarrassing him. I could apologize as I always did by opening my legs. But I was a different kind of dirty that day. I smelled like my remains. I’d be embarrassed too if I opened myself anymore. On the way back home, I could barely see myself in his rear-view.  How could the good boyfriend’s girl tell if the memory she picked was truly a good one?

All I wanted was to make you happy, he said. How a man can make a weapon even with his kindness. 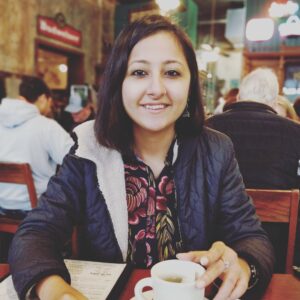 Preeti Vangani is a poet and personal essayist. She is the author of Mother Tongue Apologize (RLFPA Editions), winner of RL India Poetry Prize. Her work has appeared in BOAAT, Juked, Gulf Coast, and Threepenny Review, among other journals. She is the poetry editor for Glass Journal and holds an MFA in creative writing from University of San Francisco.