He remembered only fragments: scrubbing himself in the shower while she waited; finding her wrapped in a window curtain, staring out at the lights of the Strip; kneeling to kiss her stomach before removing her underwear. She squeaked like a mouse, which he took to be an affirmation. He couldn’t remember the act at all, or if it had even occurred. The next morning, she was gone, and he didn’t think to survey the room for evidence. He had a horrible hangover, and a plane to catch.

A month later, someone started making small withdrawals from his account, from ATMs up and down Nevada. The amounts were not material, and anyway it was his own money. His wife had insisted they each keep separate financial lives. “You never know what’ll happen,” she’d said, “and I always want to be able to make it on my own.”

He wished he had saved something tangible from that night. A piece of hair, a swath of fabric. Her scent had clung to his wristwatch for weeks.

Eventually, she sent him a condom wrapper, along with a cocktail napkin from the bar of the hotel where he’d stayed. It could have been anybody’s condom, anybody’s napkin. She sent it to his work, where his wife would not see it. I didn’t seem possible that this girl knew so much about him.

That night at the club, she had told him she was dancing in order to open a dog shelter in her home country. “Which country?” he’d asked. “Nevada,” she’d said, and sucked a silver pendant into her mouth. Later, he put the same pendant in his mouth, and it tasted like gasoline.

When the withdrawals stopped, he was sure that she was dead. In any event, he felt her absence like a death. On his next business trip, he went back to the club, but she wasn’t there. “Maybe she’s already been found,” the bouncer said. The guy had pistols tattooed above his eyebrows.

In his dreams it was he who killed her. He chopped her up and put her remains in a box in his garage, where it sat for months, years. She was a project he couldn’t get around to.

Meanwhile, he went to his daughter’s soccer games. They took turns reading pages to each other. She read so slowly, he felt his life seeping out between words. He brought her shorter and shorter books, as if she were getting younger, worse.

Years later, he found the girl passing out flyers on the Strip. She had the same implausibly long hair, but everything else had changed. It turned out she was running a shelter, but it wasn’t for dogs. The flyers read, Do you feel powerless? Do you know someone who’s being exploited? I do, he thought. That night he haunted the clubs, looking for someone to punish. 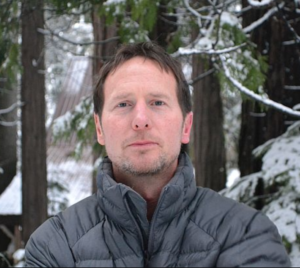 Brian Crawford lives in the San Francisco Bay Area, where he does corporate communications by day and writes fiction in his garage in the early mornings. He was named a 2019 Breakout 8 Writer by Epiphany and The Authors Guild. His work has appeared in Crazyhorse, Arts & Letters, Epiphany, Carve, New South, McSweeney’s Internet Tendency and elsewhere. More at briancrawfordwrites.com.