Little Red looks down the barrel of the wolf’s nostrils. The forest around them crackles with frost and snow.

“What long legs you have,” he says, looking them up and down.

It’s a compliment of course, and she should take it as such. But she can’t. She glances at the ground instead, saying nothing. The snow around her ruby pumps glistens. She pulls her cape tighter over her shoulders, moving the front to cover her thighs.

“And what big lips you have,” he snarls, licking his own.

She touches her lower lip. It’s cracked in the cold, probably pinker than ever. Blow job lips, she’s been told, as if that’s their primary function.

She presses them together, shrinking their volume.

The wolf is medium-sized. Maybe no taller than her on its hind legs. And that’s how he’s standing. Tall like an American statue, like he’s ready to be bronzed or applauded. His chest is puffed out and his claws are so sharp that they look manicured into blades.

He clears his throat in a low howl. She absorbs the sound into her skin. It sinks and settles.

“And what coiled hair you have,” he says.

“All the better for discrimination,” she says, then winces at herself.

The wolf growls, his eyes dark.

Anger starts bubbling at the surface of Little Red’s skin. It crawls beneath her bones, pushing her to say more but she knows she shouldn’t. She’ll be responsible for whatever happens next. Heat rises within her, radiating from her chest as she bites her tongue down.

Her heart thumps, loud and then fast before racing – and sweat leaks from her armpits and her knees and her neck. She shakes. Her insides rattle. Big, dark patches form and spread across her clothes. She pants, breathless, and then she howls from the discomfort.

It’s her – and she’s him. She’s gobbled him whole and now he’s inside: fur and claws and cavernous appetite. And her red clothes are a sodden heap in the snow beneath her. 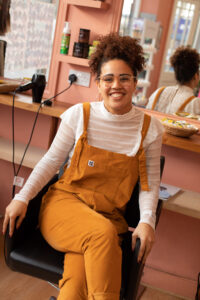 Gemma Doswell is a content writer working in startup tech. She studied a Creative Writing Masters at University of Manchester and regularly writes non-fiction for Restless Magazine, a new publication for feminist journalism. She’s currently writing the three-thousandth draft of her debut novel for young adults, The Scream, and can otherwise be found talking about race and equality in various corners of the internet.