Yerkovitz was glad because of all the ideas he had—so many that they seemed to burst forth into his brain uncontrollably, one after another, big ones, small ones, brilliant ones, and quite ordinary ones.  It didn’t matter that some ideas were tiny, like pebbles, because he valued them as well.  No idea, he thought, was too small.

One fine day, as he counted his ideas until he could no longer keep track of how many he counted, Yerkovitz lost his balance—I think it was on Twenty-third Street where this occurred—and fell face forward onto the pavement.  It was a hard fall and he cracked his skull.  As a result, his ideas, every one of them, instantly jumped out of his head and began bouncing down the street like so many red rubber balls.

People to the left and right of him, seeing what happened, froze in amazement.  Others, full of envy and wishing they possessed some of the ideas, ran hurriedly after them and tried to claim them for their own.  When the ideas, all of a sudden, started going in different directions, heading this way and that, some people became confused.  They didn’t know which idea to run after first.  If a person was lucky enough to catch up with one, it was often to no avail, as some of the ideas were not so easy to grasp and, once picked up, would very quickly slip out of the person’s hands.

One idea, which bounced all the way down Sixth Avenue and came to a rest on Thirteenth Street, appeared to be the biggest, most coveted of all.  It was truly incredible, as anyone could see.  Though it looked heavy, it was the essence of lightness.  A few close friends of Yerkovitz’s—at least those he recognized, perhaps mistakenly, as his close friends—got to the idea first and fought viciously over it. They yelled at each other, pushed and shoved, and before long their anger escalated into a huge brawl.  In the midst of it, they failed to perceive that the idea, jostled in the melee, bounced away, down one street and then another, and then another after that, until it disappeared altogether.  No one ever found out where it went.

Yerkovitz, meanwhile, who was in bad shape, was taken to a local hospital, where doctors worked on him day and night.  Although he received the best medical treatment available, and eventually recovered from his head wounds completely, he never had a single idea again. 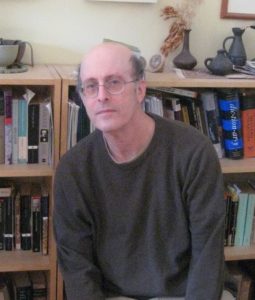 Dennis Pahl is a professor of English at Long Island University. His fiction has appeared in Confrontation and is forthcoming in Leopardskin & Limes.  He has a few illustrated chapbooks with Prehensile Pencil-Feral Press, including Orlov & Friends and Four Tales of Hope and Melancholy. Three of his stories have been made into short movies, and his latest film production, The Museum of Lost Things, based on his story by that name, has been nominated for best short comedy at the Madrid International Film Festival. With his wife, the collage artist Luda Pahl, he has also co-written a book of cartoons,  Shall We Go and Ruin It? (Prehensile-Pencil Press).